Mike Colahan is a graduate of Ithaca College where he won the short story fiction prize three out of the four years of his undergraduate study. In 1995 his unpublished novel "Something to Happen" won honorable mention in the William Faulkner Pirate Alley literary contest.

In 2015 he self-published "Career School." Set in a small business college in Philadelphia headed by a kindly Quaker school director, a dean, and an outrageously unscrupulous admissions director, the novel dramatizes both comically and with sympathy the psychology of people in education who let their principles falter when enrollments diminish and chasing revenue becomes more important than the welfare of the students.

In 2018 he self-published "The Gospel of Catherine Deare."

Mike has worked in higher education for more than 30 years in a career that has allowed him to work with students from all economic backgrounds. Raised a Methodist, he turned to the Quakers in his forties, and has spent the better part of his adult life examining God's relationship with Humanity.

He lives in Pennsylvania with his family. 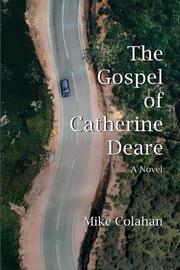 THE GOSPEL OF CATHERINE DEARE

After the 9/11 terrorist attacks, a woman leaves her family to follow a man she believes is Jesus.

In this novel, Catherine Deare lives a happy but ordinary life in a suburb of Pennsylvania. Contentedly married and the mother of a well-adjusted teenager, she works as an entertainer at children’s birthday parties (she studied music in college). Then one day that begins like any other, she picks up a hitchhiker who says he’s headed to Philadelphia who’s preternaturally intuitive and generally mysterious, with just a hint of the kind of religious zeal that usually discomfits her. Before he departs, he inexplicably guesses that Catherine suffers from the loss of a child—she did, in fact, lose her daughter, Lindsey, in a freak accident some 10 years earlier. She is convinced she just met Jesus, and at the very least he looks the part: tall and slender, with a mane of long hair and a face blanketed with a full beard. Later that same day, Catherine discovers that the World Trade Center was attacked and the grim news slowly trickles in from friends, family, and television reports. The nation as a whole reacts to the catastrophe with a blend of implacable bloodlust and ostentatious displays of patriotism, which makes Catherine profoundly uncomfortable, a collective response powerfully captured by Colahan (Career School, 2015). Even Catherine’s husband, Brian, an otherwise reasonable man, is overcome by a “thirst for vengeance.” Then, emotionally roiled by stress and her family’s insistence that she enlist the help of a therapist, Catherine runs into that stranger yet again, who takes her to meet his group of disciples, who refer to him as “Lord” and “Master.” He confirms her suspicions that he is Jesus, and Catherine abandons her family to join his quest to return to Bethlehem.  Colahan builds an emotionally arresting drama around a refreshingly unconventional premise. And Jesus’ band of disciples is an intriguingly eclectic bunch, including a prostitute and a fugitive serial rapist. Jesus remains an enigmatic character even after he affirms his identity—he seems remarkably ordinary in some respects for a divine personage, and his refusal to present an unambiguous demonstration of his power through the performance of miracles frustrates his followers to no end. Still, there’s something nebulously masterly about him, a kind of supernatural spirituality that makes his preposterous claim plausible. The conceit of the novel produces some philosophically searching discussions about the nature of Christianity and moral judgment, the character of evil and sin, and topical issues like the death penalty. Colahan also raises a provocative question: If Jesus were to actually walk the Earth today, what would be his purpose? Jesus answers this obliquely: “Catherine, believe it or not, saving the world from its problems has never been my mission. That’s like expecting a marriage counselor to save every marriage. The counselor shows the troubled couple the route they should go, but they still have to take the journey themselves or the marriage will fail.”

Being a dad. Who knew?