Mike Shellenbergar divides his time between Summit County, Colorado and Rockport, Texas. He lived in Playa del Carmen, Mexico for twelve years and spent a year and a half in the Far East. The small island he lives on in Rockport is named Key Allegro. He loves the mountains both in the summers and winter, where he hikes and skis. He lives on an the water on Key Allegro where he enjoys warm winters and the laid back life style of island living.

Mike is a veteran of the United States Army Security Agency, and a member of the Sons of the American Revolution. He is also a private pilot and a dive master with many hour spent under the Caribbean Sea along the eastern coast of Mexico. He holds a degree in Biology from the University of Central Missouri and has a Doctor of Dental Surgery degree from the University of Missouri-Kansas City. He practiced for thirty years in Rockport, Texas.

His education in English grammar was concentrated with Mrs. Krause, who was his high school english teacher and also taught all of his undergraduate english courses in college. He is and avid reader and always wanted to write, but his busy dental practice didn't leave time for him to invest in writing. He moved to Mexico and there started to write his first novel.

He has written five novels, two are unpublished westerns. One is named,"Quail Creek Ranch", and the other is named, "Elijah Pike". His two published action thrillers are: "Recovery and Terminate" and the recently published, "Prairie Fire. The third novel in the Top Secret Presidential series is completed and being edited. It's working title will be, "The Darian Gap War".

“... the author has managed to vividly reproduce tone and set pieces of a 1980's action movie in novel form...”
– Kirkus Reviews 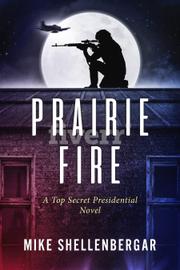 In this sequel, two American operatives discover an assassination plot.

Hawk and Cowboy, a pair of veteran snipers and best friends who recently served in Vietnam, are now working special missions for none other than the president of the United States. After tangling with some drug dealers in Mexico, the guys are back in Southeast Asia—in Laos, specifically, though they may have to sneak across borders. After an attempted jungle incursion leads to an ambush, Hawk suspects that they were set up, but by whom? The covert operations in which they are involved are all but anonymous: “No one in Laos kept any type of identification on them, so they had been given the collective ID of MACV-SOG team one. No names. They took turns being number one and number two. No one went by their right name in Laos.” They find out that their presence in the area is seen as a threat to the heroin trade operating out of the so-called “Golden Triangle,” in which the CIA is heavily involved. While on an assassination mission, Hawk and Cowboy uncover a plan to eliminate the top CIA official in the region—a scheme to be carried out by an elite Cuban sniper who has come to Asia to kill Americans. With the help of an old friend from their Mexican adventures named Liz, Hawk and Cowboy seek to protect U.S. interests, but they may have finally met their match in the form of this mysterious Cuban sniper. Shellenbergar’s (Recover and Terminate, 2018) prose is muscular and exact, demonstrating a persuasive grasp of the particulars of military life and jungle operations. He is adept at writing combat scenes without losing readers in all the commotion: “When the grenades blew and the wounded started yelling, a lone NVA came running from the jungle toward Hawk, his SKS level and firing. He was missing each shot as he ran toward Hawk. The enemy’s bayonet was pointed at Hawk’s chest.” The characters are a bit clichéd and the plot is more than a little ridiculous, but the author has managed to vividly reproduce the tone and set pieces of a 1980s action movie in novel form.