Originally from Shreveport, Louisiana, B. Michael (Mike) Thorne attended Louisiana State University, obtaining a bachelor's degree in sociology. He later returned to earn a master's degree and a Ph.D. in experimental psychology.

Thorne subsequently spent 40 years at Mississippi State University as an academic psychologist. During his career as a professor, Thorne published numerous papers in refereed journals. He also wrote or co-wrote multiple books, including Statistics for the Behavioral Sciences, Connections in the History and Systems of Psychology, and Biological Psychology.

Thorne has written several short stories, primarily in the horror genre. One of these, Worms, placed ninth in a Writer's Digest contest with more than 2,300 entries. He has written nearly 900 articles on coins and coin collecting for national numismatic periodicals.

His other interests include cars, cooking, watching movies and British TV shows, reading, exercising, traveling, and writing reviews for TripAdvisor (aka psychprofessor). Thorne is retired and lives in Starkville, Mississippi, with his wife, Wanda. They have two children and three grandchildren.

“While some elements of this story are fairly standard, including the setup, Thorne provides some effective twists. The author, a psychologist, has put his experience to excellent use, deftly exploiting the hypnosis gimmick. He also has a subtle way with characters. . . . There is. . . an ingenious and somehow fitting denouement concerning the woebegone Jon. Readers should get a satisfying kick out of this whodunit. A murder story with some clever twists.”
– Kirkus Reviews 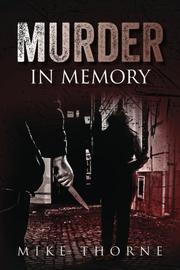 A debut novel takes readers to the campus of a small Southern college where a serial killer lurks.

The opening is eerily familiar—readers are with the unnamed killer at night as he hides in the bushes outside the college library and quickly dispatches student Heather Conley. Later he will do the same to another student, the luckless Millie Darnell. The case falls to Grady Noland, the town’s police chief, a capable enough fellow though hardly a Sherlock Holmes. Other players are Jon Evans, a mousy English professor; his wife, Doris; and Dr. Henry Andrews, the college psychologist who is central to the plot. So, who’s the culprit? There are few clues, and the college just wishes the whole embarrassing thing would go away. Meanwhile, the Evanses’ marriage is on the rocks, and Doris begins an affair with hunky cop David Parker. Soon they are meeting at his trailer for “lunch.” Jon manages to become a default suspect thanks in part to Doris’ implications. Then, midway through, there is a surprising development: readers find out who the killer is. But of course Grady is still in the dark, though he is beginning to doubt that Jon is the murderer. The key plot device here is hypnosis, something Henry is quite adept at. Jon slips under willingly because his life is such a mess and the technique affords some relief. But the psychologist harbors a sinister scheme involving hypnosis and the murder case. And Henry pulls it off—until Grady starts trying to piece together the truth. While some elements of this story are fairly standard, including the setup, Thorne provides some effective twists. The author, a psychologist, has put his experience to excellent use, deftly exploiting the hypnosis gimmick. He also has a subtle way with characters, delivering telling details, as when he shows poor obese Millie, fresh from Henry’s office, losing—incredibly quickly—her resolve to eat less or when Thorne depicts wimpy Jon beginning another hopeless day. The author also paints an effective portrait of Doris as a shallow, self-absorbed shrew. But some plot turns, such as the final scene, ask a bit too much from the audience. There is, however, an ingenious and somehow fitting denouement concerning the woebegone Jon. Readers should get a satisfying kick out of this whodunit.

A murder story with some clever twists.

Most anything by Stephen King--Carrie, Salem's Lot, The Shining, etc., etc.

Thorne lays coins aside for murder, 2017

Connections in the History and Systems of Psychology, 3rd edition

This is the story of two murders in the fictional Southern town of Harper and how the local Chief of Police strives to solve the crimes.

This is the story of a psychology professor who's experiencing chest discomfort. His problem is diagnosed as atherosclerosis, and he undergoes cardiac bypass surgery. Recovery involves dramatic changes in his lifestyle, and the book ends with the main character running a 10K race for the first time.