Mike Van Lear explores future consequences of an increasingly polarized society. The short fuse permeating American culture and politics is a theme in his writing. So too is a yearning one has for the peaceful, bucolic life. Science fiction is an underlying theme, offering his readers imaginative yet morally problematic possibilities of a better world. The manifestation of cultural and political tribalism is a notion Mike opposes yet seeks understanding of its seemingly unlimited capacity.

Agitators, Mike's first novel, pushes the boundaries of intolerance and its impact on friends and foes alike. Set in 2024, the approaching Presidential election pits xenophobic challenger, Earl "Dutch" Chapman, against embattled incumbent, President Drummond. Caught in the middle is Lou Denslow, a Secret Service Agent connected in more ways than he'd like. Lifelong friends and Lou's widower father, Vincent, become intertwined in the personal and professional quandaries facing Lou. Will their collective actions defeat Chapman who promises to Restore America?

“The author uses the setup to deftly editorialize how the destruction of the American middle class by moneyed interests fosters a climate of blame and bigotry too easily exploited by political cabals.”
– Kirkus Reviews 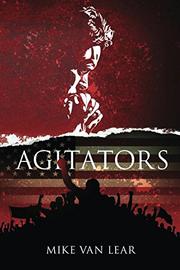 In a near-future America rocked by anti-Muslim sentiments, a Secret Service agent weighs a top-secret mission to thwart a vile, racist presidential candidate from achieving the Oval Office.

Featuring Allen Drury–like Washington, D.C., polemics of yesteryear; down-home Minnesota color; and pure sci-fi fancy, this debut cautionary novel opens in election year 2024. Although future benefits include renewable energy, self-driving cars, and sensible gun control laws (a consequence of neo-Nazi snipers murdering 263 in a single strike), the U.S. is in turmoil thanks to an economic recession combined with an influx of “Hajjis,” unassimilated Muslims fleeing a fierce Islamic civil war ravaging the Middle East. Even without guns, organized right-wing, white militants, aka Agitators or “Agits,” clash with Hajjis in deadly street fights in major cities. Republican presidential hopeful Earl “Dutch” Chapman only benefits, as he’s an unashamed Muslim hater with a “Make America Great Again” platform. Meanwhile, Lou Denslow, a Secret Service special officer, revisits his aged father and old pals in Minneapolis. Fair-minded Lou loathes Agits and is uncomfortable with the prospect of guarding a neo-fascist White House occupant, as Chapman gains support over feckless incumbent President Drummond. Chapters alternate between Lou and his personal life and flashbacks detailing the rise to power of the rabble-rousing Chapman. While real-life names and incidents (9/11, of course) have cameos here, Van Lear skillfully makes Chapman as far from being a Donald Trump look-alike as practical. The illegally adopted son of an odious Texas oilman, Chapman is a former Dallas mayor, Lone Star State governor, and Beirut war veteran with a fondness for punk rock, gratitude for Barack Obama’s nailing Osama bin Laden, and an arrest record stemming from his addictions. While Hajjis are described as being insular and harboring a few jihadis among their hordes, they are sympathetic and law-abiding compared to the scruffy Agits—flag-waving, drug- and alcohol-abusing louts from broken homes, not unlike their favorite candidate. The author uses the setup to deftly editorialize how the destruction of the American middle class by moneyed interests fosters a climate of blame and bigotry too easily exploited by political cabals. But a last-minute cascade of twists hastily piles on sci-fi tropes, coincidences, and a Twilight Zone deus ex machina that seem like a bit of a cheat compared with the realism and ripped-from-the-headlines urgency of everything that preceded them.

A provocative premise (the day the neo-Nazis came to Lake Wobegon?) undercut by a far-fetched finale.