Born in Serbia, Milena Banks has lived in China, Japan and the UK, and has experienced the fascinating nuances of multiculturalism: how the perspective of race, politics, manners, and gender color relations, enriching, muddling, and deepening human understanding. Riding the Tiger is the culmination of that experience, and her first novel. She now lives with her husband and dogs in Maine, rescuing horses, growing roses, and painting portraits.

“A spectacular novel of colonial China that should put this first time author on the map.”
– Kirkus Reviews 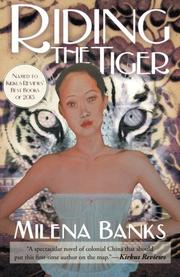 This novel draws on the shared, complicated colonial history between the British and Chinese peoples and spans six decades, starting in 1937 when fighting between Japanese and Chinese troops led to the Second Sino-Japanese War. It focuses on Jardine, a young Chinese orphan who knows little of her past. In 1997, Jack Morgan, an elderly, dying Kentuckian who has lived in China for decades, summons Jardine to his apartment and tells her, “The woman who kept you from knowing who you are has recently died.” That woman, Violet Summerhays Morgan, was Jack’s long-suffering, infertile wife and the daughter of Percival Summerhays, Jack’s benefactor and boss. Jealous of Jack’s imagined and real affairs, Violet cheated, lied and even murdered in her attempt to win Jack’s love and destroy her competition. But in 1937, Jack met and fell in love with Ana, a Russian émigré, and had a daughter with her named Bella. That girl’s fate, and Jardine’s, is inextricably bound to that of her parents’ and those of their many friends and enemies in business and romance. Banks’ evocative prose is impressive throughout: “Algy knew he’d always remember this moment, the sound of the clock on the wall ticking, the man’s hand as it clutched the bottle, and the look of the wife, slow and hateful, as they drank her liquor and her happiness.” The plot twists like ginkgoes in the wind as the characters cruelly betray one another. As Jack tells Jardine, “Modern man is no better off; he only thinks he is because he has television and gadgets, can shit in a flush pot, and see the world—still a savage, though.” In the end, Banks delivers an engaging tale of forgiveness and the strength of familial ties, even when those ties have been frayed almost to extinction.

A spectacular novel of colonial China that should put this first-time author on the map.

Named to Kirkus Reviews' Best Books of 2013: RIDING THE TIGER