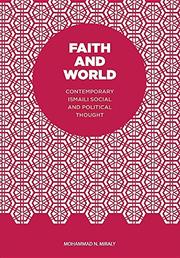 A searching appraisal of contemporary Ismaili philosophy and its relation to modernity.

Islamic thought is famously fissured into Shia and Sunni strains, but that neat bifurcation hardly captures its competing allegiances. In the eighth century, following the death of Jafar al-Sadiq, a set of contentious claims regarding his successor was issued, and those who recognized al-Sadiq’s son Ismail as the true heir were eventually called Ismailis. That group itself experienced its own repeated splintering, but as a whole, it has always been a minority within the Shia followers, and a persecuted one as well, scattered across the globe. Western scholars typically know very little about Ismaili philosophical currents, but this is somewhat ironic, as the core of Ismaili beliefs roundly embraces progressive, liberal principles like democracy, pluralism, multicultural diversity, and social justice. Debut author Miraly explores the curious way Ismaili beliefs have exerted an outsized influence on Islamic thought at large despite historical marginalization. He wrestles with the twin possibilities that either Ismaili historians have appropriated liberal categories and grafted them onto revisionist interpretations, or, in some form, these principles were already contained within the ancient Ismaili tradition. Along the way, the author ably dissects that tradition’s approach toward the interpretation of the Quran and the ways Ismaili scholars locate and even ground liberal values on past religious and ethical thought. Miraly also investigates the work of the Aga Khan Development Network, which is essentially the social activist organization of the Ismaili community. Finally, the author considers the way a transnational community of Ismaili disciples presided over by the 49th Ismaili Imam, Aga Khan IV, has formed and how the cultural and political character of Canada has proven particularly congenial to Ismaili commitments. Miraly’s erudition is breathtaking, and the rigor of his analysis unrelenting; he deftly considers all the reasons why Ismaili theology has been so intellectually agile and politically adaptable. He avoids any facile conclusions; instead, he interrogates the internal coherence of the history presented by Ismaili scholars rather than its rightness. As he writes at the conclusion of the study: “In some sense, all historical scholarship is reinvention.”

A compelling analysis of the relationship between Islamic thought and modernity.