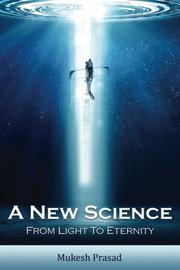 A scientific freethinker draws on his Usenet posts to argue for reinterpretations of mainstream theories.

In this book, Prasad (God vs. the Universe, 2015, etc.) challenges scientific orthodoxy on subjects ranging from the role of carbon dioxide in shaping the Earth’s climate to the physical characteristics of the human soul. In presenting his arguments, the author also celebrates the culture of Usenet and other online discussion forums, where he developed and honed his theories over several decades. Prasad approaches established science with a contrarian’s enthusiasm, disputing the particle-wave dual nature of light, the conclusions of climate change studies, the customs of academic publishing, and Albert Einstein’s role in developing scientific theory. The book draws on a broad range of published research, though the papers’ authors would likely dispute many of Prasad’s interpretations of their work. Prasad writes in an excitable style, with more than 90 exclamation points appearing throughout the nearly 140 pages of the book’s body, and with unfettered confidence: “Judged on the basis of this principle [Occam’s Razor], my theory of light is superior to existing theories.” There is also a hint of the conspiracy theorist in the volume’s approach, particularly in the discussion of government-funded research into climate change, described as “massive corruption.” The author accuses climate researchers of ignoring the complexities of the system immediately before supporting one of his arguments with “This is what happened in reality, though the actual data are different, and these graphs are merely an example to clarify what really happened.” With its overabundance of exclamation points, italics, and all-caps text, along with its sense of entitlement (“My objection and my answers to all the other questions, including my explanation of light, need to be on the record and fully acknowledged”) and incredulity (“I felt that the totality of online information on these subjects was somehow subtly changing”), the book retains close ties to its origins in online postings without moving beyond Usenet into a more refined and coherent scientific argument.

While exploring a rich variety of topics, from climate change to Einstein, this collection of scientific thoughts lacks polish. 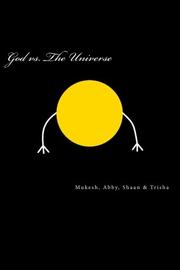 God vs. The Universe

A short collection of miscellaneous observations about spiritual matters in various religions.

The four authors look over the tenets of Christianity, Islam, and Hinduism and use leaps of intuition and conceptual history to examine what they see as the “truths” of those faiths. The bulk of the book’s opening segment discusses Christianity and makes several assertions about Jesus Christ (stylized here as “Y’sa,” or as a new Messiah, “M’sa”) and his role in bringing about the downfall of the Roman Empire: “To defeat the Romans, he [Y’sa] sees that faith in the Roman system needs to be broken,” the authors write. “This faith is based on the fear of crucifixion.” They style Y’sa as a “top-notch physician of the time and place” and imply that his medical knowledge (along with a specially drugged vinegar) allowed him to survive the ordeal of crucifixion, thereby breaking the psychological power of that form of execution for the Romans. But because the authors admit from the outset that “no attempt has been made to provide citations or other scholarly trappings,” these and other observations amount to questionable historical fiction. The book asserts, for example, that the ancients didn’t understand what heartbeats were; that if Y’sa were alive today, he would be a vegan; and, most incredibly, that Muhammad promised gay sex in the afterlife to his martyred followers. The scholarly “trappings” that the authors avoid would flatly contradict these and many other claims in the book, which will leave readers confused about whether to take them as speculative or not. The authors’ calls for an Islam without violence and a Hinduism without excessive mythology are refreshing. However, they don’t compensate for the other ideological imbalances.

A short, disjointed work of religious speculation that will appeal mainly to readers who already agree with the authors’ hypotheses. 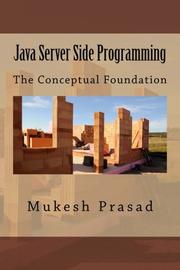 Readers get a guided tour through the creation of a stripped-down server using the Java computer programming language in this slim volume devoted to illustrating the conceptual foundation of server-side programming.

Pared down to essential details, this book aims to guide beginning programmers through the creation of their own Web server in the Java language, starting with sockets: “[P]hysical electrical sockets are very simple. You plug something in, and you have a circuit. In the programming world, things are a bit more sophisticated.”  The book then works through progressively more advanced concepts (sessions, form processing, servlets), up to the creation of JavaServer Pages. Using clear, colloquial language and copious code examples—both in the text and in downloadable files—the book builds a foundation that allows readers to understand concepts by practicing actual, hands-on programming, rather than reading about theoretical constructs. Readers are expected to know the basics of Java programming before starting, as Prasad makes clear in the book’s introductory pages. However, although Java programming newbies may not find many code examples to be immediately clear, the accompanying text is generally easily digestible, and most chapters are short and simply explained. Although the audience for such a book may be relatively narrow—not only is a certain skill set and level of experience required, but also a particular mindset—readers who are familiar with any type of programming should be able to follow Prasad’s sturdy writing and clearly stated arguments. In both the code and the accompanying prose, the author demonstrates efficiency and clarity, two qualities necessary in the practice—and instruction—of programming.

An illuminating, if not in-depth, study of basic principles of programming practice.