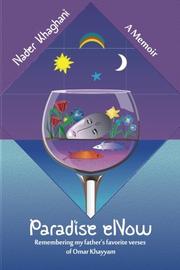 A memoir about one man’s brush with death and how he took solace in poetry.

At the outset of this work, novelist Khaghani (The Grand Conference of Birds at Grant Park, 2012) tells of how, early one morning, he suffered a heart attack. He initially told himself that it was just digestive problems, but when he finally went to the emergency room, the truth was revealed. After surgery, the author had to wait a month before undergoing yet another procedure. During this time, he writes, his body was weak, and as he struggled with basic tasks, such as walking to the bathroom, he had time to contemplate big questions about life and death: “Dying is easy, life is hard. Why is it so?” Khaghani admits that talk of dying always made him uncomfortable—and now that he was faced with his own mortality, he was uncertain about where to turn. His answer came from the writings of the 11th-century Persian scholar Omar Khayyam. He was perhaps best known in his own time as a mathematician, although he’s credited with producing a great deal of poetry, introduced to the Western world in the 19th century in translations from English writer Edward FitzGerald. The author offers both FitzGerald’s and his own translations of Khayyam’s works, which he says he used to make sense of the fragility of life. He explains that, eventually, his goal became to “energize soul and body with a true love of life regardless of the ever-present threat of death.” Khaghani make clear in this text that Khayyam’s bluntness is his strength, and for readers who are new to the poet’s work, this bluntness can be terrifying as well as enlightening: “Ah, make the most of what we yet may spend, / Before we too into the dust descend.” The author’s takeaway from the poet’s work was that “death was no longer a strange dark monster ready to swallow me whole on the spot.” Whether or not the reader agrees with this insight, Khaghani’s book does effectively illuminate what it means to be close to death yet determined to make sense of it all. Just as the author’s translations contrast with those of FitzGerald, readers will come to see that there are varied ways of looking at one’s own existence—no matter how doomed it may be. The author’s prose style is very loose throughout, and following his thought process isn’t always a simple matter; aside from Khayyam’s works, he incorporates such disparate material as Plato’s philosophy, a reference to a Japanese tea ceremony, and even a conversation with a fly. These sources offer a broad range of ideas, but they do take away from the nuanced focus on the poet’s work. After all, a reader need not search far to find books that analyze Plato’s thoughts on death, but a new and deeply personal translation of Khayyam’s poetry is a much rarer find.

A highly unique account but one that occasionally strays from its most engaging elements.