Independent, eclectic, curious, and resilient...these are some of the words that describe award-winning author and editor Nadine Galinsky Feldman. Her work ranges from self-help to memoir to contemporary and historical women's fiction.

Although always interested in writing, Nadine didn't start writing books until age 40, when life took a nasty turn. A debilitating illness, followed closely by pregnancy losses, financial difficulties, and the breakup of a marriage, forced her to re-examine her life. After a stillbirth, she found healing for her grief by writing her first book, When a Grandchild Dies: What to Do, What to Say, How to Cope. From then on, writing became a permanent fixture in her life.

She is currently working on a historical fiction novel, Factory Girl, to honor the legacy of her great-great grandmother, whose existence she discovered just a few years ago during a genealogy search.

A lover of travel, Nadine has visited many countries, where her goal is always to immerse herself as much as possible in the local culture. Currently, she and her husband Henry divide their time between New York City and the Olympic Peninsula of Washington State. When she's not writing or traveling she tends a garden she describes as "magical," practices yoga, and tracks down her ancestors as best she can.

“An engaging story about friendship and financial schemes.”
– Kirkus Reviews 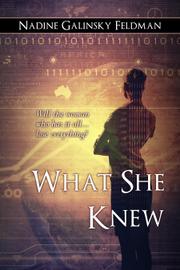 A Wall Street executive’s life changes drastically when her firm takes a huge hit during the Bernard J. Madoff scandal.

Feldman (When a Grandchild Dies, 2014) tells the tale of Liz Nabor, a Wall Street executive who seems to have it all: perfect job, perfect boyfriend, perfect New York City lifestyle. It should come as no surprise that this situation does not last—the catalyst for the transformation in this novel is the real-life Madoff scandal, which results in a huge loss for Liz’s firm. One of Liz’s clients, the fictional Jim Leininger, was in league with Madoff, which causes the firm to fire her and her boyfriend and results in her friends shunning her, blaming her for their financial losses. Soon the innocent Liz realizes that she may be facing criminal charges, despite her ignorance of Leininger’s machinations. On top of all this, Liz receives word that her estranged Aunt Eddie is ailing in faraway Port Livingston, so she visits to try to make peace with her family while she still can. When Aunt Eddie bequeaths her own journals to Liz, the fired executive realizes that the key to solving her present problems and forging a new future may lie in the past. She must figure out whom to trust and who really has her best interests at heart. Feldman creates an engaging story here, and setting it during the 2008 financial crisis and the Madoff scandal links it to the zeitgeist. She peppers it with effective details that bring the story vividly to life without slowing it down. Liz’s arc, of loss followed by a search for redemption, is fairly predictable, as is some of the writing—Liz realizes that “somehow, along the way, she had lost any sense of true friendship,” which is hardly surprising. It also seems obvious that the hunky caretaker of Aunt Eddie’s house may become more than just a friendly supporter to Liz. Yet, this doesn’t detract from the story’s earnest appeal and likable characters that make readers feel invested (pun intended) in the outcome.

A predictable but entertaining story about friendship and financial schemes.

gardening - something i didn't start doing until age 51

The Foreign Language of Friends

When a Grandchild Dies: What to Do, What to Say, How to Cope

When a grandchild dies, grandparents grieve not only the death, but the suffering of their bereaved sons and daughters. Yet their pain may be ignored by family and friends, leaving them to grieve alone. The result of interviews with several bereaved grandparents, When a Grandchild Dies provides ideas for communication with family and friends, coping strategies, and insights. It includes stories and quotes from those who have experienced such a loss.