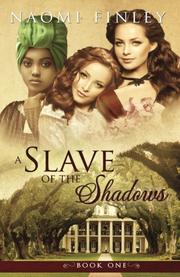 A SLAVE OF THE SHADOWS

In this first historical novel in a series, debut author Finley tells the story of a young woman of the antebellum American South who takes on entrenched institutions in order to get justice for her friends.

In 1850, 18-year-old Willow Hendricks is the lady of the house at Livingston, her father’s South Carolina cotton plantation. “I was your typical Southern belle on the surface, which pleased my father,” she reflects, “but my wayward opinions gained his disapproval.” Those opinions include the notion that women should have as much say over their lives as the men around them do; she also hates the brutal system of slavery that keeps the plantation running. With the help of a new friend, an outspoken Bostonian named Whitney Barry, she attempts to secure freedom for the slaves in her life, including Mammy, the woman who raised her, and Mary Grace, whose beauty attracts unwanted attention from white men. Going against the system means great risk for Willow and Whitney, but in doing so, Willow may learn secrets about her own family—including the identity of a man who surreptitiously moves about the plantation. Finley writes in a finely wrought prose style that vividly conjures even the most mundane details of the period: “Behind the privacy screen, with Georgia’s help, I dressed for the day. After a quick use of the chamber pot, Georgia and Sam returned to the closet.” She shows herself to be an adept storyteller, and paints Willow as an admirable, compelling protagonist. The book has all the secrecy, romance, and plot twists that one could hope for in a historical melodrama, but the author also adds a pleasing dash of progressive politics and feminism that gives the work a higher purpose. Those looking for a less-problematic alternative to Margaret Mitchell’s Gone with the Wind could do worse than this novel, which feels surprisingly relevant to the current historical moment.

A pleasant costume drama with a focus on liberation.

A SLAVE OF THE SHADOWS: Readers’ Favorite, 2018

A Guardian of Slaves

Willow Hendricks is now the Lady of Livingston. She manages this plantation with her father and best friend Whitney Barry. The two women continue her parents’ secret abolitionist mission. They use the family’s ships and estates to transport escaped slaves along the channels to freedom. Willow’s love for Bowden Armstrong is as strong as ever, but she is not ready to marry and have a family because of her attention to these noble pursuits. Torn by her love for him, can their bond survive his reluctance to support her efforts with the Underground Railroad? Meanwhile, whispers among the quarters sing praises of a mysterious man in the swamps helping slaves escape. He is called the Guardian. They believe he will save them from brutal slave catchers and deliver them to the promised land. Masked bandits roam the countryside, but the Guardian and the criminals evade capture. A series of accidents and mysterious disappearances raise alarm throughout the region. Who can Willow and Whitney trust? One false move or slip could endanger the lives of everyone they love and bring ruin to the Livingston Plantation.
Published: Feb. 5, 2019
ISBN: 9781775067665

RUBY STEWART is a slave living under the false pretenses of a freed black women in New York in 1853. She abides in turmoil longing to know where she came from. This unrest has caused her to be plagued by dreams and visions of a man she calls the Black Knight and a woman with haunting green eyes. Ruby's only recollection of her past is the name Mag, until she receives a letter from friend Willow Hendricks in the South describing a slave girl that passed through her family’s plantation over twenty years ago. Does Ruby dare hope this slave child might be her? Meanwhile her job as a journalist at the Manhattan Observer––a penny newspaper––has Ruby fighting feelings for boss and friend Kipling Reed. She struggles with the impossibility of a relationship between a woman of color and a white man. But her skin color isn’t the only hindrance standing in the way of this romance. The unavailable Willow Hendricks has won the eye of Kipling. Torn by her feelings of a love that can never be, will Ruby be able to put the questions of her past to rest?