Natasha Rafi has written for Money magazine, The Blade, The Friday Times and A. Magazine among others. She graduated magna cum laude from Wellesley College and for a time supported herself by writing copy for an ad agency, while secretly rereading Nancy Drew and Dr. Seuss. After numerous successful jingles and catchy voiceovers, she went to NYU’s journalism school for a Master’s degree which led to a journalism career starting with The Blade in Toledo, Ohio. In Ohio, she won an Ohio Public Images award for a story on special needs children, and she also contributed to two books on Asian Americans. Natasha profiled authors such as Bharathi Mukherjee, Bapsi Sidhwa, and filmmaker Ismail Merchant, but the highlight for her was the fortuitous pleasure of working alongside Millie Benson, the original writer of the Nancy Drew series. Back in New York, Natasha worked at Money magazine as a reporter and welcomed her baby son, followed by a daughter. Shel Silverstein and A.A. Milne proudly graced her bookshelves. The Jinni on the Roof is a story she made up to tell her son’s classmates at his school when asked to read a Muslim holiday book. The book has been dramatized and performed by children in schools during Ramadan. With her children grown far beyond elementary school, Natasha is back to rereading books from their bookshelves and writing several of her own.

“In her debut book, Rafi tells a warmhearted, amusing story about growing up in one’s faith.”
– Kirkus Reviews 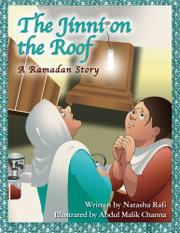 THE JINNI ON THE ROOF

In this illustrated children’s book, a boy’s prank leads to a better understanding of the true spirit of Ramadan.

In Lahore, Pakistan, 8-year-old Raza lives in a multigenerational family house. During Ramadan, which involves fasting during the day, adults eat a special pre-dawn breakfast called sehri that includes delicious parathas, made of hot and flaky fried dough. Raza loves these, but he must wait for his own later breakfast because young children aren’t expected to fast like adults do. Early one morning, he smells wonderful aromas from the kitchen and decides that he just has to have some sehri for himself. He sneaks out of his bedroom, climbs to the flat roof, and bellows down the chimney in his deepest voice to Amina, the maid: “I want you to make some parathas for me!” Frightened, Amina believes that a supernatural jinni is on the roof and runs to Raza’s grandmother, his “Nani.” She soon sees through her grandson’s prank, and although he does get some parathas, he’s also scolded for deceiving and frightening Amina and given a task to make it up to her. Raza realizes that his Nani is right to do this: “How would he be able to fast in the future if he could not even wait for breakfast?” The next year, Raza keeps his first fast, which his family celebrates by giving him money and presents. The book includes an author’s note on Ramadan, a glossary, and a recipe for parathas (which notes that an adult should fry them). In her debut book, Rafi tells a warmhearted, amusing story about growing up in one’s faith. The character of Nani handles Raza’s mischief well; she goes along with the prank to a certain extent, and he’s allowed to have his parathas, but he doesn’t get away with mistreating Amina, who forgives him and tells him stories about jinn. As a result, the boy is allowed to be boyish while still being gently guided toward his greater responsibility as a Muslim. Illustrator Channa’s rounded shapes and soft colors add to the book’s welcoming feel, including nice touches, such as an adorable orange kitten in the background who also gets into some mischief.

An affectionate, amusing tale that serves as a sweet introduction to a Muslim observance.

Must eat Mangoes in a Monsoon

The oppressive heat is followed by refreshing rain as Naila and her family celebrate the monsoon season in South Asia.

Alina tricks a whole village into believing in a new kind of fruit. Her story takes the reader from the grocery store to the farm and the original seeds.