Nathan lives in the San Francisco Bay Area, where he has recently embarked upon a new career in teaching. In Nathan's spare time he has been writing and creating the graphic novel Boylord, which combines his various interests of redwood forests, science, spirituality, Dungeons and Dragons, and Star Wars. Nathan received his PhD in Entomology from the University of Hawaii at Manoa, and went on to research insect neuroscience at the National Institute of Mental Health in the Washington DC area. After 12 years in the lab, he decided to move west to be closer to family and friends. Having written many scientific research papers, he changed gears and decided to use his creative juices to produce the sci-fi fantasy space opera Boylord.

Looking for the next great story, with years worth of original content, that can make the jump to animation? The Boylord series is just beginning, and there are ten graphic novels planned. Book two is being worked on now, and we expect to complete at least one book per year. If you are a publisher, agent, or multi-media company looking for a new series that can be upscaled for any medium, look no further! Boylord is what you want.

“A wildly original and fearless tale about a young hero’s clash with a demon.”
– Kirkus Reviews 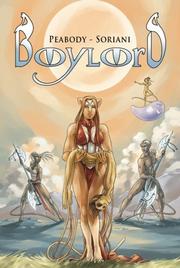 In this graphic novel debut, the disappearance of a high priestess’s son mars an alien festival.

On the planet Vareenya, the town of Shepherd is about to celebrate the opening of the winter solstice festival. Ettan, son of High Priestess Giulia, doesn’t want to go. He loathes his people’s reliance on telepathy and would rather enjoy the company of his close friends Yinyin, a being of liquid thought, and Eggbeam, an ahmenor larva. While in the ancient sequoia forest with Yinyin, Ettan becomes worried about Eggbeam’s whereabouts. He contacts Gen. Lilly, who tells the boy he’s paranoid. But Ettan trusts his gut and “cogiports” with Yinyin through space to visit his friend Alice in a lab on the rogue planet 666. Meanwhile, the war goddess, Killjoy, has grown bored with combat. After finishing a battle on the planet Herpetol, she meditates and consults the Divine Mother, who reduces the goddess to spirit form to clean her karma. Killjoy then receives the chance to do good. She arrives in the 666 lab, where she witnesses Eggbeam being tortured by a Soul-phage. The scene is orchestrated by Kazundal, Killjoy’s demonic half brother. Yet before she can intervene, Ettan and Yinyin enter the lab’s cavern entrance. They fight Kazundal’s henchman, Hornhole, and rescue Eggbeam from the Soul-phage. Then Kazundal summons more advanced Soul-phages, which strip Ettan’s essence and organs from his body. While Ettan is trapped in hell, Killjoy’s spirit merges with the remains of his body. Back on Vareenya, Giulia begins her vocal performance only to feel the shock of her son’s anguish. For this innovative series opener, Peabody teams up with illustrator Soriani (The Magical Tale of Birthday Dust, 2017, etc.) to combine spirituality, classic sci-fi concepts like telepathy, and cultural motifs—such as Giulia having two husbands. The creators maximize their use of the graphic novel format, presenting a visually dazzling story that takes numerous cues from sci-fi (such as spaceships that look like jellyfish) but doesn’t fret over whether or not a race of feline humanoids has a believable backstory. The author and illustrator run hard and fast with so many oddball ideas—including a molecular realm populated by beings called Ed and Fred—that comic-book readers used to superhero fare should be entranced (even the telepathic word balloons, indicated by a wi-fi symbol, are clever). The inventive sense of humor matches the characters themselves, as when Hornhole is pinned to the ground, through the hole in his head, with a sword. Colors by Soriani and debut artist Zibordi are eye-popping, with a mostly cool palette for the backgrounds, allowing the warmth of Ettan, Giulia, and Yinyin to stand out. Most of the characters have attractive, expressive faces, conveying a friendliness that will draw in younger fans. But the content is mature, with lots of nudity, occasional cursing, and gory fight scenes. Overall, the narrative’s crisp art and lean script make for a sinfully quick read. The closing chapter brings the relationship between Ettan and Killjoy to an intriguing resting point; the sequel should be eagerly anticipated by readers.

A wildly original and fearless tale about a young hero’s clash with a demon.