Neal F. Thompson entered the United States Army as a warrant officer candidate in August 1970, two months after graduation from Riverside-Brookfield High School in Riverside, Illinois. He completed flight school at Ft. Rucker, Alabama in November 1971 and served a one-year tour of duty in Vietnam as a helicopter pilot in Troop F, 8th US Cavalry, 1st Aviation Brigade. He logged nearly 600 hours of combat time was awarded the Distinguished Flying Cross (1 oak leaf cluster) and the Purple Heart.

Following his discharge in 1974, he attended Triton Junior College in River Grove, Illinois, from which he graduated with high honors in 1976, and the University of Illinois at Chicago, where he was a Lincoln Scholar, receiving a B.A. in history with high honors in 1978. He completed his education at Northwestern University Law School, from which he graduated cum laude in 1981. After ten years of private practice, he became a prosecutor in DuPage County, Illinois, where he remained for the next thirteen years, being appointed Supervisor of the Financial Crimes and Public Integrity Unit in 1996. He taught legal writing at DePaul University Law School and lectured at both the state and the national level on trial practice, reckless homicide prosecution and forensic evidence.

Mr. Thompson joined the Illinois National Guard as a helicopter pilot in 1975 and served for 28½ years, retiring in January 2003. He practices law today in Chicago and lives in Naperville, Illinois, with his wife Jaime and their children, Nick, Zack and Cate. 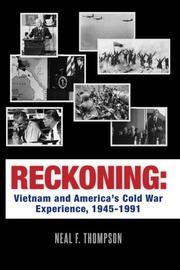 A revisionist history of the Cold War challenges simplistic notions of America’s heroic victory over communism.

The now-conventional historical interpretation of the Cold War imagines a relentless half-century of bipartisan resistance against the global spread of communism inspired by American diplomat George F. Kennan’s famous theory of containment. It sees the low points of anti-communist policy as being the unhinged witch hunts of McCarthyism and the morally and strategically disastrous military campaigns in Southeast Asia. However, debut author Thompson, a practicing attorney, contends that the real story is a far messier one and that foreign policy during the Cold War years was largely shaped by domestic political squabbles, electoral opportunism, and brazen mendacity. President Harry Truman, he says, was skeptical about the strategic significance of South Korea but understood that its surrender to communistic forces would be a political catastrophe for the Democratic Party. Truman’s intervention in Korea became the paradigm for U.S. foreign policy in Asia as a whole, the author notes; neither Presidents John F. Kennedy nor Lyndon Johnson were ever truly committed to repelling communists in Vietnam, he says, but both worried that the perception of weakness in the face of communist aggrandizement would be punished at the polls. The book offers similar analyses of the distance between conviction and action for Presidents Dwight Eisenhower, Richard Nixon, and Jimmy Carter. Thompson argues that U.S. foreign policy, built around the Truman Doctrine, did in fact contribute to the demise of both communism and the Soviet Union, but the implementation of that doctrine was still largely “directed from start to finish by an incompetent, dishonest, corrupt political class, with evil conduct, dumb luck, and the law of unintended consequences providing this country with its Cold War victory.” The author researched and wrote his study over a span of 16 years, and his meticulousness is evident on every page; his command of the relevant historical materials, both primary and secondary literature, is beyond reproach. His thesis is an impressively subtle one, avoiding demonization or valorization of any of the primary actors. For example, President Ronald Reagan is described as the one American president who governed in a way that was congruent with his own political philosophy, attached in word and deed to the destruction of the Soviet Union. However, the author also points out what he sees as the lawlessness of Reagan’s presidency—a continuation of the Cold War legacy in the executive branch, established by Truman. As a whole, the study largely covers familiar ground and relies heavily on the secondary literature—a fact the author acknowledges by calling it a “work of synthesis rather than original history.” Nevertheless, it’s a valuable single-volume introduction to a plausible counterhistory of the Cold War that ably calls into question, among other things, the notions that the Vietnam War was unwinnable and that McCarthyism was motivated by baseless fantasy. Also, Thompson provides some trenchant thoughts on how to rehabilitate American democracy, including recommending compulsory military service for all citizens.