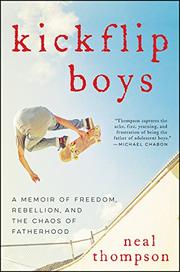 Permissive parenting clashes with adolescent rebellion amid the skateboarding subculture.

As the two skateboard-obsessed sons become increasingly disruptive to family harmony and the narrative proceeds from school discipline issues to pot-smoking defiance and legal skirmishes over trespassing and graffiti, it would seem that this is building toward a horrific climax. Thankfully for Thompson (A Curious Man: The Strange and Brilliant Life of Robert "Believe It or Not!" Ripley, 2013, etc.) and his family, the sons stepped back from the precipice toward the end of high school, straightened out, and found some sort of independent maturity. So what initially seemed like a cautionary tale turns out to be a rite-of-passage story. The lacerating power of some of the chapters comes from the author’s recognition that he has perhaps “become their enabler,” that he didn’t recognize where all this was leading until it was almost too late, and that his own teenage experiences with skateboarding and marijuana hadn’t prepared him for this brave new world. “If my 1970s skating had been a pastel-colored tableau, smooth like 1970s AM radio,” he writes, “the boys skated like a gray-hued mash-up of grunge, punk, and rap, all angsty and illegal.” Thompson also confesses to the insecurities of a writer whose career has stalled, who numbs himself with alcohol and has to hide the Xanax after his son tells him that it has become “the new heroin” among their crowd. Could this loving family have handled things differently? Definitely. Could they have handled things better? That’s more difficult to answer. The author admits that his wife worried that this book would “memorialize our incompetence,” while he countered that it would “celebrate our persistence.” It also shows that Thompson recognizes promising material when he sees it (and lives it) and knows how to heighten the drama for narrative momentum.

A highly candid memoir of parenthood that often fascinates and occasionally frustrates as the author tries to come to terms with the causes that have produced these particular effects. 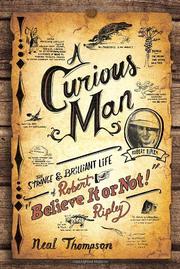 Biography of legendary “Believe It Or Not” cartoonist, world traveler and eccentric millionaire Robert Ripley (1890–1949).

Although capturing every dimension of an oddly complex character like Ripley is no easy task, biographer Thompson (Hurricane Season, 2007, etc.) turns in an obsessively researched but somewhat workmanlike study of the Believe It Or Not founder, whose amazing American life itself plays out like an impossible fairy tale without the need for any particular showy literary finesse. Ripley was born in the 1890s into a lower-middle-class family in California and grew into both a formidable athlete and cartoonist, two interests he would later combine and pursue as a sports cartoonist. But after a few failed stints as a cartoonist for small-time San Francisco newspapers, he moved to New York to try his luck. But it wasn’t until he took his first overseas journey to Egypt and across Europe that he began to cultivate an interest in human oddities and exotic cultures that would eventually make his fortune. He jumped from cartoons to radio and then took the Believe It or Not franchise to books and TV. By the 1930s, while most of America was reeling from the Depression, Ripley was one of the highest-paid and most well-traveled men in the world (he visited around 150 countries in all). Unfortunately, once World War II commenced, he found the world was no longer his playground, with hostilities breaking out in all his favorite countries: China’s submission to communism in the late 1940s was particularly heartbreaking for Ripley. Overall, Thompson’s book only skims the surface of Ripley’s psyche without delving too deeply into what drove his odd wanderlust and exotic tastes. The author’s competent bricks-and-mortar prose is nothing special, but it does adequately convey a detailed fly-on-the-wall–style narrative from the (often unbelievable) facts of Ripley’s own life. A nuts-and-bolts, mostly nonextraordinary rendering of an extraordinary American life. 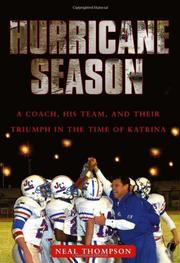 Even a Category 5 hurricane can’t stop a revered coach and his championship high-school football team.

Popular historian Thompson (Driving with the Devil, 2006, etc.) begins in the locker room of New Orleans’ John Curtis Christian School on August 26, 2005. It was the night of the “jamboree” scrimmage that opened the season, and members of the Patriots were hoping to win another state championship for their school. Nationally recognized coach J.T. Curtis, also the school’s headmaster and son of its founder, knew that his hardworking, enthusiastic squad couldn’t compare to last year’s lineup. Many key players had graduated to college ball, and he needed to mentally and physically condition a young, unproven team with efficient, college-level practices consisting of “equal parts Broadway musical and football drills.” The 2005-6 Patriots included an anxious new starting quarterback, a Harvard hopeful, a spiritual heavyweight and a star linebacker whose religion forbade him to play on Friday nights. John Curtis School favored community building and happiness over flashy exteriors, and Coach Curtis reflected those values in his broadminded teaching style and paternal approach to his players’ personal lives. Hurricane Katrina confronted him and his team with the ultimate challenge. Returning to the drowned city, J.T. found the school in miraculously good shape and set out to reunite his squad and get them on the field again. Some players were tempted to join teams in other school districts, and Hurricane Rita tested them once again, but the devoted coach kept on plugging. Thompson deftly profiles a generous selection of players and families torn apart by the disaster and considers the contagious obsession for football shared by participants and fans alike. In a somewhat meandering fashion, he delivers a fully realized interpretative portrait of a coach and a sports organization willing to sacrifice all in the name of football.

Longwinded though affecting tribute to resilience and solidarity. 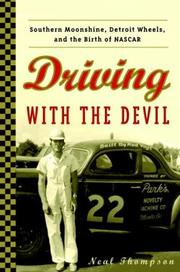 DRIVING WITH THE DEVIL

Setting his sights on the NASCAR phenomenon, Thompson (Light This Candle, 2004) focuses on the sordid origins of the sport, this country’s second most popular, behind only football.

It’s a provocative premise. As the author reminds us, stock-car racing was invented by moonshiners who first conceived of souping up Ford V-8s in order to elude Prohibition-era law-enforcers as they hauled corn whiskey from mountain stills in the hills of northern Georgia down into the cities of the deeper South. Dodging hairpin curves and wily cops, these moonshiners, in Thompson’s view, exemplify American ingenuity and self-reliance, qualities he suggests continue to make NASCAR so extremely widespread. Controversial NASCAR founder Bill France worked hard to distance the sport from its shady origins, striving to organize and legitimize a pastime seen as low-class, criminal and distinctly Southern. Recounting those disjointed early efforts, the author warmly reveals his admiration for pioneer drivers such as Lloyd Seay, Roy Hall and Red Byron, mechanic Red Vogt and, above all, for the races themselves. Unfortunately, Thompson’s transparent affection for his subjects prevents him from objectively assessing NASCAR’s legend-enshrouded figures. He displays all the skill of a seasoned journalist in his pacing and savvy storytelling, but his awestruck worship of his subjects, voiced in purplish prose, betrays a “homer” mindset. Swept up in the frenzy of the adrenaline-charged races he narrates, the author often interpolates thoughts and emotions to which he cannot be privy. This is a shame, because his grasp of the sport’s history is abundant and presentation of anecdotes exceedingly interesting.

Reverential attitude at odds with its gritty premise—but all of which NASCAR fans will lap up. 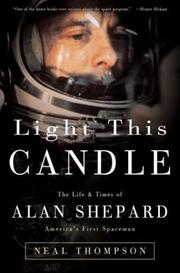 Studly astronaut Alan Shepard (1923–88), scion of an old New England family, was born just two decades after the Wrights launched at Kitty Hawk. After Navy service in WWII, Shepard honed his flying skills landing jets on pitching carriers in the dark before becoming a superlative test pilot. Cool, competent, and confident, his skills took him to NASA as one of the original Mercury Seven, America’s first team of astronauts. Adroit at astro-politics, Shepard fiercely angled for first place above his six equals, clean-cut John Glenn being his prime competitor. In 1961, as Russia maintained its decided space advantage, Shepard was launched by a Redstone rocket on a fast trip that took him 302 miles from where he started. The NASA script reserved in case of disaster was scrapped, Thompson notes, in his fine reconstruction of the suborbital flight. Possessed of a beautiful wife and an engorged ego, Shepard flamboyantly womanized. He was mercurial: charismatic and playful sometimes, arrogant and hard at others. Temporarily grounded because of an inner-ear disorder, he acted as Chief of NASA’s Astronauts Office. Surgery cured the dizzy spells, and Shepard, still looking for envelopes to push, maneuvered to get a booking on a trip to the moon. A decade after his first flight, he took command of Apollo 14 and whacked a golf ball across the lunar surface. He was 47 and weighed more when he returned than when he left. He had, it seemed, more of “the right stuff” than anyone else. Like the other Mercury astronauts, he didn’t care much for Tom Wolfe’s wildly popular account of their exploits, but Thompson’s rendition of the sheer audacity displayed as mankind left the Earth easily equals Wolfe’s. Shepard, retired from the Navy as a rear admiral, died a Texas capitalist, followed within weeks by his loyal wife.

Just what a biography should be: sharp, evocative, and brisk.