Neil Ronco is the author of the novels The Girl Showed Up, Texas Hold em' and the Queen of Hearts, Elevator Symphonies and the motion picture Save Me. He is also a member of SAG-AFTRA and has acted in motion pictures, soap operas, plays and commercials. He is also a successful entrepreneur as a founding member and CEO of Brentwood Asset Advisors, Inc. He has a B.A. from the University of Virginia, an M.B.A. from the University of Miami and studied screenwriting at UCLA.

After submitting the unpublished manuscript, The Girl Showed Up to Kirkus for review he added a co-writer to tighten the story and edits. Since the story revolves around a strong female lead and retail business establishments he added Cathy Maddux to the team. Cathy has a B.S. from the University of Florida and has been in various sales and sales management roles including working for Jon Gordon companies, a motivational speaker and writer/publisher of several motivational books. Cathy currently owns and operates a women’s clothing boutique in Northeast Florida.

“A well-crafted, character-driven crime story with insights about greed and need.”
– Kirkus Reviews 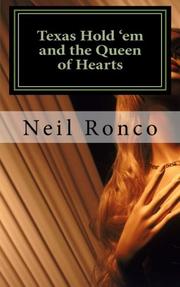 Texas Hold 'em and the Queen of Hearts

A high-stakes tale of boy-meets-girl, etc.

Jack Gage was a handsome, down-on-his-luck kid, born in prison to a mother taking the fall for his deviant, absent father. When Jack was 12, his mother died, leaving him to live with an aunt and uncle in a small seaside town. Shortly after, he meets her, the prettiest girl in school and the one who would steal his heart forever: Patti Cain. When they were both 18, Patti and Jack shared a single kiss, followed by a proclamation: While he’ll always be the one she wants, stability and money come before love. The two went off to separate colleges. Jack became a great golf player and Patti, a millionaire’s wife. Now, 20 years later, Jack is professional gambler, wielding poker and golf as his weapons of choice and nursing a fading hope of ever seeing Patti again. Then, Jack’s old high school nemesis, Van Taylor, appears and makes Jack an offer: help Van hijack business from one of the richest men in Florida—Patti Cain’s husband. Though the odds are stacked against him, Jack will risk it all to see his true love again. Ronco (Elevator Symphonies, 1999) endeavors to combine the finesse of golf and high-stakes intrigue of poker into a story of inaccessible love. While readers may be able to forgive the proliferation of exclamation marks, they might become a bit frustrated with the considerable amount of explication, as well as the play-by-play of every golf hole and poker hand, which renders the plot a bit static. Despite this, Ronco provides a twisty, unpredictable plot, with Jack Gage proving to be a fairly reliable narrator exhibiting devious but understandable intentions.

THE GIRL SHOWED UP

In Ronco’s (Texas Hold ’em and the Queen of Hearts, 2010, etc.) crime novel, an investigation gives a woman the chance to escape a drug cartel’s clutches—if she can outsmart the IRS, the Drug Enforcement Agency, and her own father.

Young, beautiful, and intelligent Charlotte Randolph is also very good at her job in the family business, which happens to be a Mexican drug cartel. She specifically runs a money-laundering operation, disguised as a marketing firm, in Jacksonville, Florida; she works with struggling small-business owners with one important characteristic: “They all felt life was unfair to them.” IRS agent Sandy Dawson has the perky look of a high school cheerleader, but she’s focused and ambitious. When she notices increased sales among Jacksonville stores that prefer cash, she discovers they’re paying about $20,000 a month to Randolph Marketing. She alerts the DEA and questions some Randolph clients, panicking them and bringing Hector Randolph, Charlotte’s father, to town. Though Charlotte’s work (and her mother’s long-ago abandonment) has given her a hard shell, she’s not a sociopath like her father is; she cares for her lover, Phil, and has some sympathy for her clients, such as a restaurant owner with a special needs child, and she wants out of this life—especially after she learns horrifying news. With several innocent lives at stake, Charlotte concocts an elaborate plan to keep herself, her clients, and the man she loves safe. Ronco delivers a fast-paced and entertaining story in his latest novel. That said, it would have benefited from a stronger edit to eliminate typos. It’s strengthened, however, by its thoughtfulness about how and why people get caught up in illegal schemes—often, they simply need the money due to circumstances largely out of their control. Some may be greedy and selfish, it points out, but others are just caught between a rock and a hard place. Readers may think it impossible for Charlotte to escape the various nets being drawn around her, whether by her father, the Mexican cartel, or the IRS and DEA, but it all leads to a clever and satisfying ending.

A well-crafted, character-driven crime story with insights about greed and need.