The best time of Nelson Donley's life took place on the BD&L – his grandfather's pony farm. He taught himself so much about equine medicine that he considered making a career out of it, but changed his mind when his veterinarian asked him, “Are you good in math?” But he loved horses so much that he eventually started his own business with American Quarter Horses. In high school, Mr. Donley majored in agriculture and used his AQHA horse business as his Future Farmers of America project. He attended four high schools in all and graduated from La Habra High School at the end of his junior year in 1973. His reason for graduating early? “I can't stand being in a classroom.”

For the next two years, Mr. Donley kept busy working at odd jobs, such as a seat maker in a factory and training horses on the side. The horse business became such a liability that he was forced to sell off most of his stock. His sorrel mare, Autobiography, was racing at Rillito in Arizona, but got stolen. After doing a bit of investigative work, he found her at a stable near Prescott Downs. A stable boy told him, “The sheriff owns that horse!” but Mr. Donley was determined to get his horse back. When the sheriff told him to get out of town by sundown, Mr. Donley called the Federal Brand Inspector who verified that the horse belonged to him. When the sheriff couldn't produce a bill of sale, Mr. Donley snootily said, “No ticky, no laundry” and took the horse back to California with him.

His last horse was a chestnut colt named after the composer and violinist Paganini. Despite an impressive qualifying time in the 870 at Los Alamitos, good-ole Paganini couldn't handle the stress at the starting gate and came in dead last. The sight of that horse bringing up the rear was an omen to get completely out of the horse business and start looking for a real job.

Two things stood in the way of getting a job – a college degree and experience. His mother suggested that he become a farrier (that is, a horseshoer), but he wanted to get away from horses, not go back to them. Besides, he had no desire to take on a career in which he actually had to “work” for a living. That left only one alternative – the classroom.

Mr. Donley entered college in 1975, majoring in Administration of Justice. At that time, he wanted to become a cop. His father convinced him that he wasn't cut out for that kind of a job, so he changed his major to Political Systems of the Eastern Bloc and minored in Economics, Classical Novel, and Philosophy. He graduated from Whittier College in 1979 and began teaching as a substitute in grades K-12.

Mr. Donley did his graduate studies at CSU in Long Beach, California. After acquiring a Regular Ed. teaching credential, he went on to earn a Special Ed. Teaching credential and MS degree. He decided not to pursue a doctorate because that would have taken too much time away from what he wanted to do most – writing unique books for a modern audience.

“While unapologetically gross, the book is ultimately motivational in its own peculiar way.”
– Kirkus Reviews 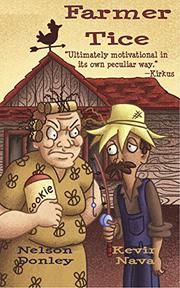 Farmer Tice can’t seem to do anything right. He tried to see the movie Snow White and the Seven Farmers only to find himself wedged between two awful theater patrons. During a stint in the Army, he was nearly court-martialed for wearing a colonel’s uniform. Then there is the fact that nearly everyone he encounters seems to want to get money out of him. Take for example when Tice was caught fishing without a license and received a $100 fine for the error. Sadly, for all of the abuse the Job-like farmer receives, he doesn’t get much in return. His obese wife, Honeybunch, despises him (“You should have known better, you idiot!” she says when he is fined for grilling hot dogs on the beach although she packed the hibachi), and it is many a night that Farmer Tice has to sleep in the barn (where he should feel himself fortunate if some animal does not eat an article of his clothing). All told, Tice is a dimmer Wile E. Coyote if there ever was one, falling off cliff after cliff only to appear again for more torment. The fun of the book comes in seeing how high the next cliff will be and when exactly old Tice will stop falling. Albeit all those falls are not for the squeamish. The stories make frequent use of bathroom humor (as with a New Year’s Eve misadventure: “the result of guzzling prune juice—the backdoor trots!”), and the accompanying illustrations only help to clarify where all those bodily fluids wind up. On the positive end, nothing seems to keep Farmer Tice down for long. Despite all the barf, fines, and his own intolerable marriage, he still has fields to plow and a barn roof under which he can rest his weary head. Regardless of one’s station in life, one can learn a lot from a farmer who won’t let his consistently poor luck keep him down.

While unapologetically gross, the book is ultimately motivational in its own peculiar way.

"All the things I really like to do are either immoral, illegal or fattening." Alexander Woollcott

Being a successful author

The Farmer Tice stories in Book #2 are a bit more advanced, and a little more sophisticated, than those in the first book. That's because this hillbilly farmer somehow manages to get himself into bigger and more complicated messes; such as the time his wife forced him to get a part-time job. Such endeavors as that can only lead to a heap of trouble, and it did.
Published: July 4, 2017
ISBN: 1544608160