A Cape Cod native, Nicole now lives outside Boston with her husband and dog daughter, Lily the lab. By day she is a high school English teacher, and she earned an MA in Publishing and Writing from Emerson College. She is also a young adult cancer survivor. (“Check those cans!”) THE HOLLOW is her first novel, written over countless lunch breaks. 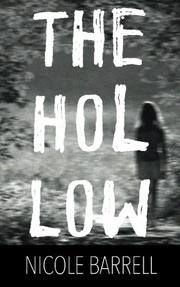 In this debut thriller, a repressed incident mars a young woman’s life for years.

In 2009, Ellie Frites is a 20-something in a dead-end customer-service job at a tech company who spends her downtime drinking with a handful of friends. She can’t seem to sustain a relationship with a man, although she does have a new boyfriend named Tim. She’s also still grieving her beloved father’s death, due to cancer, which happened more than a decade ago. Ellie’s humdrum existence is shaken up when she begins having upsetting visions of her middle-school days, set in a rundown part of Marshside, Massachusetts, known as The Hollow. The visions specifically involve Lauren Vine and Maxine Lang, two of her former school friends, with whom Ellie lost touch when her best friend, Sarah, arrived from private school. Now, she can’t remember anything about what happened to them: “Did they move? Switch schools?” When Ellie fails to get any more information from either Sarah or her own estranged mother, she decides to go see psychologist Elizabeth Rollins. The doctor’s hypnotherapy helps Ellie to unlock repressed memories, which may put her and those she loves, including Tim, in danger. In this well-paced narrative, Barrell explores the relationship between Ellie’s newfound recollections and her present-day existence. For example, the character considers herself to be a pathetic loser when, in actuality, it’s clear that her past trauma has inhibited her. Once Barrell reveals the monstrous crime at the center of Ellie’s story, readers will understand why Ellie’s mind blocked it out—and in this novel, what you can’t see can hurt you. The author also shows the subtle, positive changes in the main character’s life as she slowly discovers what’s been haunting her. The supporting cast members, both at Ellie’s work and in her private life, are equally believable. All told, Barrell’s admirable debut is an engaging journey into a troubled mind.

A promising novel that skillfully uncovers obstacles for its protagonist to overcome.

The World According to Garp