Niko Perren lives in Calgary, Canada with his wife Lara, and two cats. He holds dual degrees in Computer Science and Pure Mathematics, and works as a senior software researcher. He balances his nerdy tendencies by being a long-time participant at Burning Man, where he builds art, volunteers, and helps run a theme camp.

Niko's love of the outdoors started with alpine climbing, and progressed into expedition caving, snowboarding, and canyoneering. His travels have taken him to some of the world's most remote and beautiful places.

“An exciting, well-written and compassionate eco-thriller with real heroes and a mission worth caring about.”
– Kirkus Reviews 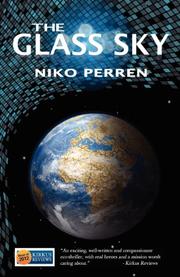 An American biospherist and a Chinese nanoengineer risk everything to save Earth’s climate in this thriller set 40 years in the future.

By 2050, Earth’s climate is in crisis. Increasing carbon dioxide levels have flooded coastlines, created deserts and worsened political instability. A few biospheres protect vanishing species, but even these preserves are threatened by corruption and graft. When biologist Tania Black is unexpectedly appointed Chief Biospherist to the U.N., she wonders if she can even make a difference. Tian Jie, a Chinese nanotechnologist, has invented a material that—if everything goes right—could make an enormous glasslike sun-shield in space, helping cool the Earth. Amid various dangers and with everything at stake, Tania and Jie (with help from supporters) risk their lives to bring the shield to reality. In his debut novel, Perren draws in the reader with a well-rounded, sympathetic set of characters grounded in an all-too-possible future world. Unlike many thrillers, what’s at stake is real; it matters right now as much as it will in 40 years. Climate change could be a preachy subject, but Perren’s characters are so lifelike that their issues are inseparable from the story, making for a deeply emotional, compelling read. Tania, Jie and friends (including Ruth, the redheaded Green Army member, and Rajit, a math genius) are distinct, funny and smart. Best of all, they’ve got heart. Jie is asked why he’s risking so much; does he have a hero complex? “Jie flexed his arm to show the lack of muscle. ‘A hero? I’m here because I have a 9-year-old son.’ ” Perren’s 2050 is also believable, with many well-thought-out technological and cultural details around the world and on the moon. Some items in this version of the future are intriguing, while some are appalling or amusing, like the ubiquitous burger chain that offers “deep-fried fiber flakes” that contain “zero percent of your daily nutrients.” Perren’s sense of humor helps balance the book’s serious concerns, and the well-explained science, including some helpful diagrams, respects the reader’s intelligence. Pacing, too, is well-handled, with events rushing to a finish that brings together several moving parts and packs an emotional punch.

An exciting, well-written and compassionate eco-thriller with real heroes and a mission worth caring about.