Nisfan Nawaz is a Sri Lanka-born British American who built a career as a business and information technology professional. He wrote Energy X, his first novel, in response to his growing concern about the influence of the world’s most powerful corporations and their impact on future generations.
Nawaz lives in North Carolina with his wife and two children.
Visit him online at www.nisfannawaz.com. 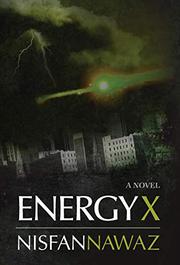 A young college student battles corporate nasties in his bid to rid the world of carbon-based emissions in Nawaz’s spirited debut thriller.

Alex Watson doesn’t just want to be yet another millstone around the neck of humanity; he wants to make a difference. Such wide-eyed idealism isn’t easy to indulge in his provincial town of Asheville, North Carolina—or so he thinks. One day, while flying his hobby plane over the Blue Ridge Mountains, Alex notices a glint on a mountainside that turns out to be a mysterious geode. After Alex brings it home, he discovers that it has the power, quite literally, to light up his whole neighborhood for the foreseeable future. The young idealist could take care of his make-a-difference agenda with this pet rock, which he calls “Bloo” or “Energy X.” Now that he has a definite plan to save the world, he recruits the help of his closest friend, James Campbell, an intern at G-Tek, to get him an audience with the global renewable energy firm. After the top guns at G-Tek make appropriate cooing noises, they do an about-face and assign their nastiest guys to decimate Bloo (and its owner, while they’re at it). Why does a renewables company want to destroy an alternative energy source? Will Alex be able to save the world after teaming up with the green energy company Occupy the World? And what do Zimbabwe’s natural resources have to do with Alex’s end goals? Nawaz’s wild adventure is action-packed and breathlessly paced as Alex and his friends engage in a David-and-Goliath battle. However, the novel doesn’t sufficiently explore its main premise of an otherworldly green-energy source, and questions linger about what exactly will happen when the limited geode runs out. A story that centers on an energy solution could have had a more unique plot than the run-and-chase, good-guys–versus–bad-guys model here. Also, Alex’s decision to mine more of the Energy X geode in Zimbabwe seems questionable given that country’s blood-diamond history and Alex’s squeaky-clean morals.

A high-voltage, entertaining roller-coaster ride that could have been more dazzling if it had kept its raison d’être front and center.

To be an advocate and champion for humanity and this planet we call Earth, and to expose injustice, inequality and "stupidity" in whatever form or wherever it might exist, and have fun while doing it.

ENERGY X (tech-thriller) by Nisfan Nawaz Energy X - A Suspenseful Thriller LOGLINE: A young college student stumbles across a permanent solution to the world’s energy crisis—and must find a way to implement before a billion-dollar corporation can assassinate him. PITCH: College physics major Alex Watson stumbles across a meteorite uncovered by a landslide. Subjecting it to a battery of tests, he soon realizes the ancient rock may harbor enough energy to power the United States—forever. Approaching a prominent green energy firm, he proposes a partnership to spread abundant cheap energy across the globe. What he doesn’t know is, the company is a front for Big Energy, tasked with buying up—and burying—promising technologies. Alex refuses to sell out—and soon finds himself targeted for assassination. Fleeing to the UK, he teams with Occupy The World to demonstrate the meteor’s value. Working together, they learn of a similar, larger meteor that could power the entire planet—and set out to recover it inside a war-torn country. There’s just one problem: Alex’s pursuers are headed there, too…