“Whaler captures the essence of Dickens' characters in brief strokes ... The sequel to Dickens' holiday classic and an ideal stocking stuffer.”
– Kirkus Reviews 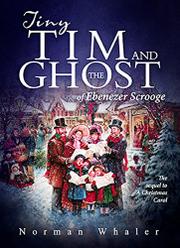 Tiny Tim and The Ghost of Ebenezer Scrooge

A debut novella and sequel to A Christmas Carol explores the adult life of Tiny Tim.

In 1857 in London, it’s a week before Christmas and former curmudgeon Ebenezer Scrooge has died. In Charles Dickens’ 1843 classic, Scrooge didn’t renounce his skinflint ways until three ghosts visited him on Christmas Eve. One of the people who benefited by his transformation was a crippled boy named Tiny Tim. Tim grew up under Scrooge’s wing, healing in the process and becoming a clerk alongside his father, Bob Cratchit, at the firm Scrooge & Marley & Cratchit. The death of his mentor, however, sends Tim into a depression that robs him of faith in himself and God. Meanwhile, Becky, Tim’s childhood sweetheart, has been shunned by her own family after her marriage to a cruel man fell apart. She and her young son, James, struggle to make ends meet by selling holly on London’s chilly streets. They are barely able to eat or pay their rent, and yet Becky remains hopeful, realizing that it “was the habit of despair that ultimately condemned a soul.” When Christmas Eve arrives, Tim stays late at the offices only to be joined by a familiar, if ghostly, face. Whaler captures the essence of Dickens’ characters in brief strokes, as in the description of Scrooge, who has “white hair glistening on his head and brow above a timeworn face of cavernous folds.” The author depicts the starkness of Tim’s craving for both Scrooge and Becky with pointed metaphors, including when he “felt strangely detached as if his caring was being poured onto the ground like a pitcher of water.” The main difference between this sequel and Dickens’ classic is Whaler’s extended theme of the individual placing faith in God, who “allows difficulties in people’s lives to see their faith grow, to prepare us for a higher level of faith.” There are four original songs by the author—including lyrics and sheet music—after the story.

A religious sequel to Dickens’ holiday classic and an ideal stocking stuffer.

Tiny Tim and The Ghost of Ebenezer Scrooge: The sequel to A Christmas Carol (Audio Book)

A Christmas Carol, Pride and Prejudice

Tiny Tim and The Ghost of Ebenezer Scrooge, The sequel to A Christmas Carol, 2016

Charles Dickens' beloved Christmas holiday classic, A Christmas Carol, is retold in verse and beautifully illustrated by Bianca Milacic. It is a story to remind us all of the real meaning of Christmas... and that a changed heart can change the world! (Christmas Holiday, Classics, Children's Picture Book)
Published: Dec. 17, 2018
ISBN: 978-1948131261

Am I Black or Am I White?

*** Eric Hoffer Book Award, Gold Human Relations Indie Book Award *** Tara's mother was Black and her father was White. But, she didn't look Black or White. Some kids didn't like this and made Tara cry. So, what does God say about it?
Published: March 23, 2018
ISBN: B07BPFZFWQ

Oink and Gobble and the 'No One Can Ever Know Secret'

(Spanish Edition) --In this romance sequel to Dickens' A Christmas Carol, Ebenezer Scrooghe dies just seven days before Christmas. Tiny Tim, now a young man who lost his sweetheart, Becky, battles anger and lost faith with the new loss of his best friend. Scrooge's ghost returns to teach Tim a much needed lesson about faith..and the real meaning of Christmas!
Published: Oct. 17, 2017
ISBN: 978-1948131049

*** Eric Hoffer Book Award, Silver Human Relations Indie Book Award *** The Tiny Tree was brand new to the forest and wanted to be friends with everyone. But, why didn't the Big like her? All the trees find out that being different is sometimes a GOOD thing. Award: The Eric Hoffer Award.
Published: Dec. 24, 2017
ISBN: 978-1948131117

Charles Dickens' beloved holiday classic, A Christmas Carol, is retold in verse and beautifully illustrated by Bianca Milacic. It is a story to remind us all of the real meaning of Christmas... and that a changed heart can change the world! Retold from Charles Dickens by Norman Whaler, illustrated by Bianca Milacic, and translated to Spanish by Seraphine B. Hoskins. (Christmas Holiday, Classics, Children's Picture Book)
Published: Dec. 17, 2018
ISBN: 978-1948131292