Dr. Chiapco is a board-certified US physician in private pediatric practice in Central, Florida. He graduated with a Bachelor's degree in Biology in 1990 and obtained his medical degree in 1994. He completed his pediatric residency at Miami Children's Hospital and served a fellowship in hematology/oncology at Montefiore Medical Center in Bronx, New York. He is certified by the American Board of Pediatrics and a fellow of the American Academy of Pediatrics.

In his spare time, when he's not out bug-hunting in the woods with his kids, Dr. Chiapco plays the guitar and enjoys listening to James Taylor music. He is a father of two and makes his home in Central Florida.

“A page turner of the highest order.”
– Kirkus Reviews 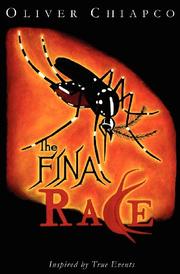 An intriguing, thought-provoking fusion of medical thriller and apocalyptic fiction.

Physician Chiapco’s debut novel begins with inexplicable outbreaks of deadly diseases all over the southern United States and around the world: brain-eating amoeba, malaria, dengue hemorrhagic fever, etc. With trophozoites (“savage microscopic beasts”) inhabiting the water and hordes of mosquitoes infesting the air, the death count soon rises into the millions; medical infrastructures all over the world verge on collapse. As civilization devolves, unheralded heroes like Bronx Metropolitan Hospital physician Jamal Jackson race to somehow find a way to stop the modern-day plague, which has brought out the worst in human nature—selfishness, brutality and deep-seated prejudice. The pandemic scenario isn’t exactly original, but the brilliance of this storyline comes from Chiapco integrating deeply contemplated scientific speculation (the influence of fossil fuels on climate change and the viability of potential renewable energy sources, for instance) and history (the trans-Atlantic slave trade, racism, etc.) with Jackson’s profound experience with sickle cell disease—his younger brother died from it—and its possible connection to saving the human race. Although the narrative’s multiple-viewpoint structure helps showcase the scope of the looming disaster, it also, in places, slows down the story’s momentum and dilutes some of its impact. Even though Chiapco’s story isn’t character-driven, he succeeds in creating multidimensional players who are integral to the story’s overall arc, like Jackson, meteorology professor John Garrett and even white supremacist Wayne Joseph Tucker. Fans of medical thrillers by Robin Cook, Tess Gerritsen and Daniel Kalla (all doctors turned authors, like Chiapco) will find this thematically powerful novel well worth a read.

A page turner of the highest order.