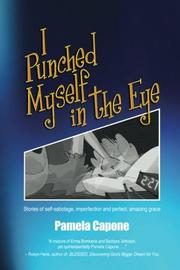 I Punched Myself in the Eye

A pleasant, candid collection of autobiographical stories and anecdotes aimed at family-oriented women.

In her second book, Capone (The Little Girl Within, 1992) recounts the major and minor moments of her life in more than 60 brief, nonlinear, and conversational “messays.” Some are serious and heartfelt in tone, while others are silly and comical. Topics range from Capone’s struggles with insomnia, her adoption as a child, her volunteer work with young girls in Guatemala, her maintenance of a stealth chocolate stash, and her occasional small humiliations when auditioning for acting roles. Along the way, she gives readers a sense of the ups and downs of her daily life in Southern California, the challenges and rewards of self-publishing, and her evolving family dynamics. Standout pieces include “The Day the Bread Went Awry,” in which a botched attempt at baking leads to an unexpected kinship with an employee at a local store, and “Parlez-vous Français?,” a cringe- and chuckleworthy episode focusing on the hazards of audition jitters. Messages of faith sprinkled throughout will appeal to readers with connections to the Christian tradition, but they’re handled with subtlety, so readers of other persuasions can still enjoy the work. In “Even Babies!,” for example, she expresses her concern about being “a deterrent to someone coming to faith….I don’t want to clobber anyone.” A handful of stories seem somewhat underdeveloped, hinting at larger lessons or themes that never quite emerge, as in “City of Gold Lamé and Angels,” a tale of a trip through Los Angeles. On the whole, though, Capone’s gregarious, approachable voice allows her to deftly handle a broad variety of subjects. Rather than dwelling on misery and mishaps, the collection calls attention to the glimmers of hope and humor that lie in life’s challenging moments.

An upbeat, honest celebration of imperfection that makes a compelling case for the power of accepting oneself, warts and all. 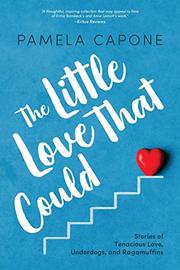 THE LITTLE LOVE THAT COULD

A set of autobiographical essays that explore family, faith, friendship, and service.

Capone’s (I Punched Myself in the Eye, 2015, etc.) latest book opens with a prologue that establishes its central, unifying theme. In it, she explains that the title of the work was inspired by the story of the “little engine that could”; it’s fitting, she says, because it’s how “love seems to have shown up in my life: underdog love, tenacious love—small love that turns into big love.” Over the course of 65 pieces, the author examines how various aspects of love have touched her life. Her subjects include her bond with her adoptive family, her volunteer work with her church and an organization that aids girls in Guatemala, her trips to Italy with her husband, and the importance of friendship and finding connections with others. Capone occasionally uses references to popular culture to underscore her essays’ themes. In “Spoiler,” for instance, she draws parallels between a relationship on the NBC television show This Is Us and her own connection to her adoptive parents. Other highlights of the collection include “Don’t Throw Away the Oar,” in which an account of her efforts to acquire an old rowboat turns into a meditation on her 33-year marriage, and “I Know She Happened,” a poignant tribute to a friend who died after a long battle with cancer. Capone’s Christian faith is a central element of many essays, including “Ragamuffin,” “Little Seed into Big Tree,” and “Risk vs. Reward,” and she delivers her spiritual messages with nuance and grace. She also demonstrates fun wordplay in “Happy Hour,” in which she affectionately describes her favorite “Pew with a View” at her church.

A thoughtful, inspiring collection that may appeal to fans of Erma Bombeck’s and Anne Lamott’s work.