The Kirkus Star and Best of 2014 winning manuscript ,The God Wave, is his first novel. Patrick is represented by Emma Parry at Janklow&Nesbit. Please direct all inquiries to her at eparry@janklow.com. 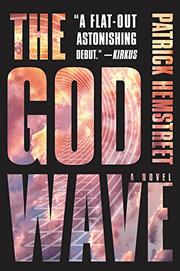 In this sci-fi debut, a team of neuroscientists exposes new capabilities in the brain that may steer human evolution toward miraculous—and deadly—frontiers.

Chuck Brenton, who has a Ph.D. in neuroscience, has been researching ways to harness the energy of the human brain for basic physical tasks. Ideally, his work would aid the handicapped or perhaps space and sea exploration. His data on gamma waves, however, is missing a baseline reading of the brain that would propel the research forward. When mathematician Matt Streegman contacts Chuck with key data from a deceased loved one’s EEG readout, the two quickly team up. They open a lab called Advanced Kinetics and soon have test subjects using their minds—via the Brenton-Kobayashi Kinetic Interface—to manipulate both computer software and construction equipment. But Matt and Chuck differ fundamentally on what kind of investors to take on: medical or commercial. Stronger-willed Matt wins out and finds himself courted by military interests. He keeps the involvement of Gen. Howard a secret from Chuck long enough to enmesh the company in complex, restrictive research, from which there’s no turning back. Yet Chuck and the test subjects—Mike, Sara, Mini, Lanfen and Tim—realize that military control of their work will lead to disaster. Luckily they have a few secrets of their own. Author Hemstreet has prepared a hard-science feast in his riveting, immensely satisfying debut. The science is always clearly stated, as are the corresponding metaphors, like one that sums up the neuroscientists’ take on burgeoning brain power: “You develop the muscles appropriate to the activity, and you learn how to use them most effectively”—essentially, “these people are…flexing mental muscles we didn’t know they had.” His characters are studies in pointed charisma, especially Matt, who’d like to “[kick] God in the teeth.” Audiences will fear for them as the plot subtly, horribly coils tighter. Ultimately, Hemstreet polishes his ideals regarding individuality and creative passion while bowing to the action/sci-fi formula. The result should be absolute bliss for fans of everything from Star Trek to X-Men. He writes a mean cliffhanger, too, one that hints at a sequel full of further narrative triumphs.