Paul Aertker (ETT Kerr) is a children’s book writer, teacher, and frequent speaker at elementary and middle schools. He began his teaching career in West Africa with the Peace Corps where he helped establish the town’s first public library. His first series, Crime Travelers, consistently ranks in the top spot on multiple Amazon categories. His newest book, Posthumous, is available in 2018.

“A reminder that inclusiveness and kindness can always defeat fear.”
– Kirkus Reviews 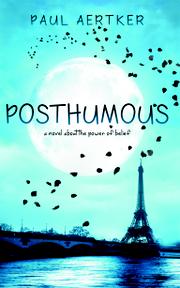 In this middle-grade novel, a young girl embarks on a mission with new friends to save and share her late mother’s unpublished manuscripts.

Twelve-year-old Ellie Kerr has just moved back to the United States after living in Paris for four years, and she has a mission. Her mom, who recently succumbed to ovarian cancer, left behind an unpublished series of stories about “kids who travel and save the world,” along with a pile of publishers’ rejection letters. Ellie is determined to get them published, but she can’t access the manuscripts from Mom’s computer. Oddly, her mother secretly changed the password before she died, and the security protocol protecting it will destroy all of the computer’s data after too many consecutive wrong guesses. Even dad’s intelligence agency-trained, computer-whiz assistant can’t hack the system. Ellie, with the help of her new friends from school, aims to find the answer to the mystery. It turns out to be proof of her mother’s deep love and respect for her—and a reminder that inclusiveness and kindness can always defeat fear. Aertker (Priceless, 2016, etc.) threads this message fairly evenly throughout the narrative, although his characterization of Ellie’s xenophobic school principal is too heavy-handed to make a later about-face credible. Also, the novel’s heroic depiction of a real-life publisher strikes a promotional tone. However, the book’s first half, in which Ellie relives her time in Paris, will have a powerful impact on readers. As Ellie’s happiness at home and at her multicultural school fades with her mother’s illness, Aertker doesn’t sugarcoat Ellie’s perspective. The physical and emotional toll on Mom, and Ellie’s emotional ups and downs as she experiences shock, denial, hope, anger, and grief, have a poignant authenticity. The author also offers other sympathetic characters, including Munda, a cook and aspiring medical student from the West Indies, and Ellie’s father’s driver, Antoine, a cello-playing jazz musician.

A frank, moving observation of a young daughter remembering her mother with purpose and strength.

The Most Interesting Teacher in the World

While sleeping on the roof of his father's hotel-spy school, thirteen-year-old Lucas Benes finds a baby alone and learns that the Good Company has restarted its profitable brainwashing business. Brainwashed (Crime Travelers #1) tracks the secret urban adventures of the New Resistance, a school of international teenage spies. Lucas leads a group of friends through the hotspots of Paris — from the catacombs to the Eiffel tower — in an all-out effort to sabotage a brainwashing ceremony that could potentially turn them all into "Good" kids. 978-1-940137-11-7 AR Points from Renaissance Accelerated Reader® Parents, teachers, and librarians will appreciate the worldwide geography and appropriate language for ages 8 – 14. BRAINWASHED marks the explosive beginning of the Crime Travelers Spy School Mystery and International Adventure Series!
Published: Jan. 14, 2014
ISBN: 978-1-940137-11-7

Lucas Benes faces his greatest challenge yet when he finds a secret message from his mother hidden inside a sunken cargo container. In a near-death scuba diving experience, Lucas and the New Resistance kids learn that Good Company CEO Siba Günerro--along with her newest and most beautiful Curukians--is planning a massive art heist. Lucas and friends scour the Spanish countryside looking for clues. But to unravel the mysteries of both the robbery and the cryptic message, Lucas must first discover the only thing that is worth more than priceless. "If it's opposite day, it could already be opposite of opposite, which would be confusing." If you find this line puzzling then you might understand why the kids of the New Resistance are able to rattle the Good Company yet again in Priceless.