Paul Mitchell, not related to the famous hair-care guy (unfortunately), grew up in Alabama and then moved to Atlanta, Georgia after he graduated from Auburn University (War Eagle!).

Over the next twenty years, he helped many medium to large size companies build strong IT Service Management organizations (or, put more simply, he helped them build a bunch of processes other people had to follow). Along the way, he learned success comes from trust, and trust comes from people (and people like to laugh and eat). He and co-author, Nicole White, chronicled their adventures in team building and the art of successful potlucks in their hilarious book "Hooves High (and other tails from across the cube wall)." Kirkus Reviews called their book "a hoot" and Mitchell/White a "dynamic comic duo."

He and his wife, Marilyn, have three amazing children and three dogs at home, and an extended brood that includes two nieces, one nephew, and three more dogs that are often there as well. His favorite foods are Tortica de Moron cookies (Cuban sugar cookies) and ketchup (certainly a food group in its own right).

“The book is a hoot, with the debut authors proving to be quite the dynamic comic duo, the kind of fun and motivating colleagues everyone should have.”
– Kirkus Reviews 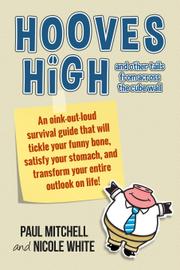 Co-worker friends, both of whom work in IT asset management, share their amused takes on the workplace, including coined catchphrases.

The titular inspiration for this debut humor book is revealed in its first story: Paul Mitchell, caught by Nicole White snagging more cake at one of their office potluck parties, says, “I don’t care. If I’m a pig, so be it. My hooves are high!” His colleagues laughed, raised their hooves in support, and “Hooves High!” was “embraced as a powerful catch phrase used by all.” Mitchell and White then unfurl an array of other humorous stories, including how and when they say “Mmnt!” “Very nice,” “Mondo!” “Really?” and still more quirks while navigating absurdities in the workplace. They share their adventures attending a Las Vegas conference (a series of mishaps from which “Really?” was born) and the officewide email exchanges unleashed when a cranky co-worker mangled the lamb toy that Mitchell had given her as part of his mission to have everyone “learn the art of being fluffy.” The book ends with tips on how to plan “Perfect Potlucks,” their favorite recipes (including Mitchell’s famous shortbread cookies, which White insists are too salty), and a lingo glossary. The book is a hoot, with the debut authors proving to be quite the dynamic comic duo, the kind of fun and motivating colleagues everyone should have. They end with a call to arms: “Ask yourself if you’re laughing enough and whether or not you are creating or contributing to a fun, happy atmosphere for your friends, coworkers and employees.” They’re never preachy, though, and their narrative is uniformly entertaining, with raunchy nods to such realities as the “resource hog” (i.e., “office slut”) further boosted by snarky bracketed asides provided by each author—i.e., “[Nicole’s Note]” or “[Paul’s Note].” While their humor may seem at times only like private jokes or highly situation-based, there’s actually plenty of universal appeal and inspiration in these charming “tails.”

Amusing and instructive commentary on dealing with office life.

"Aviva has really enjoyed her upgrade to first class. But alas, as she was carted away with the other plebians on the airport shuttle, it was the memory of those freshly baked chocolate chip cookies that reminded her she would have to marry well."