“A straightforward timeline of the demise of the Eastman Kodak Company from 1980s to their bankruptcy in 2012.”
– Kirkus Reviews 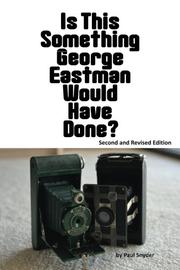 Is This Something George Eastman Would have Done?

Outlining a tumultuous 30 years of poor business decisions and lack of vision, the author wonders whether better executive leadership could have saved the Eastman Kodak Company.

Snyder states that in the 1980s, Kodak made its first foible: stopping production on 35 mm cameras that were gaining in popularity to produce a lower-quality, more user-friendly camera. From there, things got worse as the company purchased unrelated businesses, such as the pharmaceutical company that produced Bayer aspirin. During the same 10 years of nonsensical corporate buyouts, the company overlooked what had once been Kodak’s core business. After Kodak developed some of the first digital imaging sensors in the 1990s, explains Snyder, the company backtracked to build a new film plant in China. Then, just as Kodak reduced debt and restructured itself for the digital age, the financial crisis of 2008 kneecapped them. Throughout it all, Snyder asks: What would George Eastman have done? The question isn’t satisfyingly answered. Aside from mentions, which are too infrequent, the author doesn’t really introduce Eastman. In fact, the Kodak founder died decades before the book’s timeline begins, so the reader can only guess at Eastman’s abilities as a visionary, a characteristic that the author implies the company desperately needed during Kodak’s decline. The book alludes to crisscrossing storylines among Kodak’s demise, the economic effects on the company’s hometown of Rochester, N.Y., and a fierce competition between Kodak and Xerox. However, these stories don’t resolve into anything more compelling than a footnote. The author’s overwhelmingly thorough research lacks firsthand accounts that could have provided substance and context for Kodak’s undulating stock prices from the 1980s through today. Even without the additional context, the painstakingly compiled data serves as an interesting, approachable reference for those interested in Kodak or leadership studies in general.

A straightforward timeline of the demise of the Eastman Kodak Company from the 1980s to their bankruptcy in 2012.