Formerly a London-based designer, Paul has been writing full-time for over a decade, with the career change a result of being diagnosed with Myalgic Encephalopathy (M.E.) towards the end of 1999.

In addition to a dozen sports books, he has now returned to his first love – writing fiction. In September 2015 his debut novel, The Girl on the Pier, was awarded The Kirkus Star. 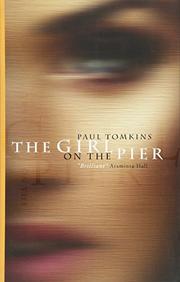 The Girl on the Pier

In Tomkins’ (Dynasty: Fifty Years of Shankly’s Liverpool, 2013, etc.) novel, a forensic artist’s romantic obsessions and traumatic past rise to the surface as he works on a cold case.

Patrick Clement has been tasked by authorities with reconstructing the face of a young, unknown victim named “Marina,” found murdered many years before on a pier in the English seaside resort of Brighton. With his marriage in shreds, Patrick moves into the cottage given to him by his aunt, the terminally ill Kitty. Surrounded again by memories of a tragic childhood (including a mother who committed suicide and a father who died an alcoholic), Patrick works to shed light on the identity of the mysterious woman, even as his thoughts revolve around some significant women who’ve disappeared from his own life: his mother, a young Frenchwoman he met as a teenager in London, and a troubled teenage girl that his Aunt Kitty once took in to live with them. In particular, Patrick’s thoughts drift toward a young woman called Black, with whom he spent a memorable evening at the pier and who’s haunted him since their first meeting. He tries to trace the whereabouts of Black and consults the retired policeman for whom he’s working on the reconstruction. As the reconstruction nears completion, Patrick comes nearer and nearer to the truth. Tomkins’ prose is evocative and devastating. He portrays the Brighton beach beautifully—the facile amusements and giddiness of the holiday destination as well as the darkness that lies beneath, as when Patrick recalls walking there with his father as a child after he’d been abandoned by his mother: “From a vendor beside a Punch and Judy show he bought me an ice cream, but not even its sweetness could distract from my distress…he bought me a red balloon, which, like a beaten finalist, I carried as a worthless consolation prize.” Tomkins’ painstaking descriptions of the minutiae of Patrick’s forensic artistry are remarkable for their lyricism and for the insight that they provide into Patrick’s need to impose order on chaos: “She is evolving, returning to life….She is far from finished, but to someone, somewhere, she might already be alive.”

The Girl on the Pier: Kirkus Star

The Girl on the Pier: Named to Kirkus Reviews' Best Books, 2015