When she is not writing, Paula Hiatt is a board game publisher who travels the world attending game conventions. She currently lives in China with her husband and three children.

“Hiatt uses interesting metaphors and visual descriptions as the love story slowly boils below the surface . . . An exceptional first effort that captures the harmony of two beating hearts.”
– Kirkus Reviews 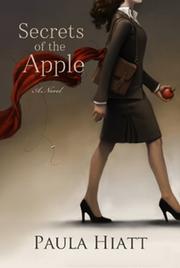 SECRETS OF THE APPLE

Detailing how family dynamics, cultural diversity and past relationships shape who we are, debut novelist Hiatt subtly explores the cavern between a successful life and a meaningful one.

Kate, a young idealistic American, and Ryoki, a wealthy Japanese businessman—both divorced—pair up professionally when Ryoki needs an assistant quickly and it just so happens that Kate’s teaching position falls through. (Readers learn later that their mutually caring families have a hand in the “coincidence.”) Their two families deeply respect each other with a long-standing business partnership and friendship, though neither Kate nor Ryoki know each other. Ryoki reluctantly accepts Kate into his office; he seriously doubts her capabilities and is concerned she'll negatively impact his big project and professional reputation. After all, he demands a grueling pace from his assistant, and the responsibilities are enormous. Kate quickly proves that what she lacks in training, she makes up for with brains, intuition and hard work. In the office, she mothers and nags Ryoki for being a workaholic, and her quirks and eccentricities annoy him. Eventually, Ryoki notices that he feels differently when Kate is away. Hiatt uses interesting metaphors and visual descriptions as the love story slowly boils below the surface, though occasionally those unique metaphors are distracting. Ryoki's thoughts—a surprising amount of self-doubt and hurt—linger under his suit, but like Ryoki, we're never quite sure of Kate's thoughts. The reader and Ryoki want to know more about her, which keeps both pushing forward. He invites her to work for him in Brazil, arranging her quarters in a guest cottage outside his home. Kate wonders why he goes to such pains for a “temporary” assistant, and Ryoki wonders why himself. In Sao Paulo, they remain platonic and professional but as intimate as a couple can be without sex. Each secretly cherishes this escape from the life they had been living before—Ryoki especially—but in their tense, tender connection, he’s afraid to act on his emotions until another man threatens to swoop in and take Kate away from him.

An exceptional first effort that captures the harmony of two beating hearts.

Secrets of the Apple Book Trailer

I was raised in a little town called Rexburg, Idaho, and now that life has taken me all over the world, I know there is no place finer.

The Adventures of Huckleberry Finn

Mom and board game publisher

SECRETS OF THE APPLE: Kirkus Star