Perry Ashe was born in Charleston SC, the fabled much steepled 'Holy City' where the first shots were fired to start our nation's most uncivil war, now in its most reincarnation quite likely the #1 tourist destination in the whole wide world. Ashe, being a native of both the gritty urban city streets and the surrounding countryside, knows his history well and a lot of dark truths about his beloved hometown and he uses them all to skewer polite Charleston society and the county's public school system in his ALICE IN WONDERLAND slash WIZARD OF OZ flavored fairy tale breakout novel UNDER A BASKETBALL MOON. Like Pat Conroy (RIP) in SOUTH OF BROAD, this novel fictionalizes legendary historically African American institution Burke High School (Ashe's alma mater). Ashe's comic take on life, basketball and HAACU culture (heavy on the male bonding) tells a far truer story. UNDER A BASKETBALL MOON features one the more remarkable female lead characters ever created. Veronica Browning Walker, the narrator's wife is the highest compensated per billable hour labor attorney on the planet with a SUPERWOMAN COMPLEX. When the NCAA pops up her radar she is rightly outraged at the unfairness of their business model when it comes to so-called student athletes. She vows to do something about it and that whole wild ride culminates in the epilogue, eight MAD pages of sex, BIG MONEY, cable TV appearances and a meeting presided over by the POTUS GWII during a work-stoppage by the players at the halftime of a NCAA Final Four Championship game, which effectively destroys or at least marginalizes the once mighty NCAA. While always trying to be outrageously funny and way over the top, not taking itself too seriously, Ashe's fable does address some serious issues like the effects of GANGSTA RAP and PRISON CULTURE on African American youth. It also has its poignant moments and early readers have been known to tear up while reading Chapter six, calling it a work of art. Chapter five, which includes a humorous penile slap to the face, introduces a new character, Regina Baker, who'd survived and won her own personal measure of happiness despite all the odds aligned against her, being born a cripple with MS. Regina's remarkable story only enhances the ancient Greek and Roman theme running throughout the narrative. With cameos by all sorts of celebrities and three POTUS', Ashe creates a highly believable alternate world where everything you thought you knew about college basketball gets turned upside down on its ear by the always unflappable, incredible Veronica Browning Walker. A woman who has been diagnosed and certified by all the best clinics in the world for that sort of thing, as suffering from nymphomania. Narrator Skip Walker had been so plagued by his neurotic overly vivid and sometimes disturbing dreams as a child that he was the only one anyone in his family circle knew who had to get therapy for that strange malady. If this was a film, recreating the surrealistic dream sequences would require a true artist like the guy who made the HALLMARK version of ALICE IN WONDERLAND with Ben Kingsley and Whoopie Goldberg. Ashe's opus, stuffed with four letter words, is written in the language of the locker room and packed with so many pop music and cultural allusions that you need a computer or laptop nearby to Google on just to keep up with him. His imagined version of his grandmother, Lease Ashe, a Lowcountry AME church legend (who in real life needed no embellishment) is a hoot, too, one for the ages, a huge part in this story. She may not have done cartwheels or walked on her hands down the center aisle of Mt. Hope AME passing the offering basket around while serving as the head usher as Ashe imagines it, but she could have. Wonderfully erotic and designed to seem like a series of diary entries (warts and all- misspellings, typos and misplaced facts), with of its overly generous digressions about eating oysters, ESPN, video games, branding, cellphone technology, social media, saltmarsh ecology, etc., the tale also begins with one the most sexually charged first sentences ever in written in a novel. With wickedly snappy dialogue: "Somebody ought to pour some water on you, bitch. You better watch out a house don't fall on your ass!", it has been proven that you don't have to be a basketball fan to love UNDER A BASKETBALL MOON. P.S. the NCAA should be very afraid of Ashe's new groundbreaking novel.

“… the most powerful and successfully executed parts of the story revolve around the author's gritty, weirdly eloquent, and unfailingly thrilling depictions of the world of big-time college basketball-the coaches and athletic directors, the big money people and fans, and especially the players.”
– Kirkus Reviews 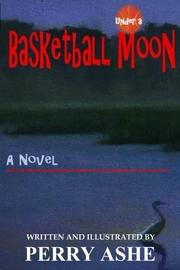 UNDER A BASKETBALL MOON

This new novel from Ashe (Toogoodoo Dreaming, 2014) continues the story of Edward “Skip” Walker, an African-American born and raised in the South Carolina low country and the first person to coach a Historically Black College or University in the NCAA Final Four. In this tale, Skip narrates his own story and stresses to readers that he is only half of a winning personal team. His wife, Veronica Louise Browning Walker, is a major character here, a prominent arbitration attorney who inspires some of the tale’s headiest stylistic riffs: “My wife loves nothing more than weaving around town at high speed making deals a cellphone tucked between her ear and a shoulder a laptop nearby probably plugged into the onboard computer in expensive little hard to drive sports cars when taking care of business.” The book also features Skip’s children, including his wards Romulus and Remus, and photo illustrations by the author. In addition, there’s a pronounced erotic thread running throughout the narrative when dealing with the husband and wife at the center of things. (Skip and Veronica are, suffice to say, very happily married.) But the most powerful and successfully executed parts of the story revolve around the author’s gritty, weirdly eloquent, and unfailingly thrilling depictions of the world of big-time college basketball—the coaches and athletic directors, the money people and fans, and especially the players. Although occasionally sloppy (there are some distracting typos throughout, including “EXORSIST” and “GODESS”), the narrative is thick with jazzy dialogue and sparkling character descriptions. Skip varies the sports talk with generous and often very funny digressions about his extended circle of family and friends. And all along, there’s the dream of victory, which is rendered with excitement but no sentimentality. “It’s an immensely beautiful and magical thing to sit back and watch your future unfold right before your eyes,” Skip reflects at one point. Readers should certainly feel that kind of momentum in these pages.

A raucous, off-kilter, and sometimes steamy tale about personal triumphs on and off the basketball court.

Publisher: Our Lady on the Hill Publishing Company