PETER HUSSEY Peter Hussey is an imaginative and creative first-time author who wrote his adventure spy and space invasion novels using plausible science-based ideas as themes. He was able to develop these ideas after years of non-fiction science reading and preparing for a rewarding career as a nuclear radiation safety technologist where a broad-based understanding of physics, chemistry and biology proved vital in attaining mastery of this multi-faceted field. As an avid but discerning fan of the science fiction genera, Peter was particularly drawn to the great dystopian and apocalyptic films of the nineteen-sixties and seventies as well as some of the novels written by the late and great authors; Asimov, Bova, Crichton and Heinlein! He wants to help pull the sci-fi genera away from the current fantasy-infused and super-hero adulating tomes currently saturating the market and instead, return to the thought-provoking and reality-based ideas of the past. He passionately believes that dynamic character development and descriptive scenery can be as vital in holding the readers attention as "mind-numbing" over-reliance on action scenes. When Peter's not busy thinking and writing about plausible themes and well-developed characters for his action-packed novels he enjoys swimming and working out at his local YMCA or frequenting some of his neighborhood bars and restaurants where many a pleasant conversation will unfold and ideas for new writing-material can originate.

“From his Kirkus Book Review for the work titled; THE WINDS OF WILL October 5, 2016 "A flawed but worthy espionage tale with an alarming villainous scheme.”
– Kirkus Reviews 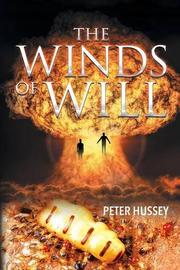 The Winds of Will

In Hussey’s sci-fi-infused debut thriller, a Chinese spy network uses coercion and force to get a U.S. Army chemist and his scientist offspring to help develop a new weapon.

Col. Ben Jessup hardly knows his adult son, professor Jonathan J. “Jcube” Jessup, and blames his ex for turning his boy against him. Cell 12, the espionage branch of China’s People’s Liberation Army, has eyes on both men. Its operatives manage to drug Ben and take him to its “super-secretive site” near Mongolia. There, Dr. Lia Tseng Li interrogates him while he’s heavily drugged, trying to extract information regarding Ben’s area of expertise: chemical weapons technology. Back in the United States, Jcube works with a new department head, Dr. Zhuo Kwai Xiang, unaware that he’s a Cell 12 spy. Zhuo hopes to use Jcube’s field of study, eusocial (hive) insects, to find a chemically based way to trigger hive behavior in mammals. The two make headway, win awards, and get a bump in their lab’s funding. Cell 12 wants Jcube to continue his work at its facility, and Zhuo is willing to use blackmail to get him to agree: specifically, a DVD featuring Jcube and a dominatrix dancer. Soon, Jcube learns the specifics on Cell 12’s wide-ranging plan. Hussey grounds his tale in intelligent scientific descriptions: “the possibility of enhanced pheromone susceptibility was not nearly as ‘big a leap’ as trying to reinnervate some functionless tissue.” The characters’ interactions are likewise believable; the generally reticent Jcube, for example, grows fond of Zhuo’s wife, Shaome, and their toddler daughter, Prixir. There’s even a potential romance that brews between Ben and his interrogator, Lia. Nevertheless, the story is hampered by typos and inconsistencies: for example, Ben’s favorite spot, Billy’s Pub, later becomes Billy’s Bar, and Jcube’s name changes to Jesse Jonathan. Furthermore, Hussey uses superfluous quotation marks around metaphors (“sink in”; “sealed the deal”), and frequently deploys all-caps during the already rousing and explosive final act.

A flawed but worthy espionage tale with an alarming villainous scheme.