For the last few years under the astute guidance of retired seminarians, Pippa Greene (the one on the left) has been studying early Christianity. Pippa is an admirer of intelligent and willing dogs, sensible cats, magnificent elephants, helpful liquor-store clerks, pinochle, good food, good friends, engaging conversation, collegiate wrestling and comfortable shoes. Pippa is perpetually amazed by her steadfast husband, her beautiful and supremely capable daughter and the boundless wonders of a quiet life.

“...(Greene's) creative narrative effectively paints scenes of both early America and the present day, which seem to be nearly equal in their levels of dark magic....The book's juxtaposition of the earnest and the downright zany make it a biting work.”
– Kirkus Reviews 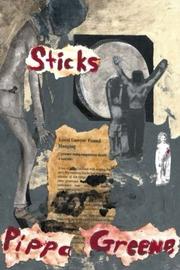 In this literary ghost story/psychological thriller, a woman is forced to confront her past when sticks begin appearing out of thin air.

“There was another stick,” begins this novel, words that sound simple—but the reality is terrifying to Barbara. Until recently, she was living a dull but settled life. But then Nothing began to produce broom handle–sized sticks from Nowhere right in her apartment. She can find no rational explanation for them or for the other strange things and people (a muscular black woman, a little girl with long braids) she begins to see and sense. The sticks keep coming, and so does Barbara’s dead father. Divining that he wants her to investigate his supposed suicide, she returns to her hometown. Her mother and brother still live there, the brother believing his bunker mates from Vietnam, which he left four years ago, are still present and speaking to him. The family’s undercurrents are disturbing: Barbara’s mother beat her children and is still controlling and abusive, while her father “was witty and likable to outsiders…but he was cruelly cynical at home.” As Barbara investigates his death, her brother plans, crazily, to kill her. She suffers great personal and psychological danger, finding nevertheless at the end of her ordeal that there is untapped potential within herself. In her debut novel, Greene orchestrates Barbara’s increasing horror well, raising the pitch with each new strange encounter while deepening the sense of dread. For example, an early remark, “Barbara’s relationship with her father became as intimate as it had been in childhood,” takes on sinister meaning as the novel develops. The plot is dark and gets darker, but at the same time, Greene threads subtle notes of possible connection throughout: the black woman sneers but offers advice and help; the child tells her “I can help you find love.” Moments of sly humor leaven the novel as well. Satisfyingly, the place Barbara gets to is as hard-won as any explorer’s mountaintop or ocean depth. Barbara earns it, and so does Greene.

A spooky, surreal ghost story that’s elevated by its humanity.