Prateek Goorha has lived all over the planet, including stints in Australia, India, Kenya, Russia, Tanzania, the UK and the US. He currently resides in Dover, Massachusetts with his wife, twin daughters and two dogs. He has held appointments at universities, and has an interest in studying innovation and entrepreneurship, among other topics. He attended the University of Virginia, Clemson, Vanderbilt and Harvard, but PG Wodehouse taught him all he knows about humor.

“...a veritable comic gem as a narrator.”
– Kirkus Reviews 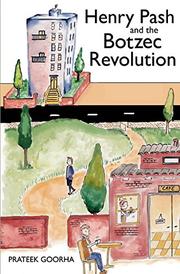 HENRY PASH AND THE BOTZEC REVOLUTION

In Goorha’s witty debut novel, the world adjusts to a company’s revolutionary computerization of businesses, an efficient method that leaves some people shortchanged.

Henry Pash laments his failure to patent his idea (not immediately revealed to readers). According to the Chief Patent Officer, his idea isn’t ideal since it’s not likely to result in something tangible. Henry later encounters the more successful George Wells, CEO of Wellspring, the company behind Botzec technology. A Botzec is a computer designed to take over the role of business executives, often replacing multiple execs and reducing costs so substantially that employment actually increases. Not surprisingly, the chiefs rebel and respond by launching the Save the Executives Movement. But Henry also witnesses the unexpected fallout of Wellspring, which moves into the education sector and leads to teachers losing their jobs. The company continues to grow into what’s practically a global takeover: purchasing banks, automating traffic, and creating a new legal tender of Well-credits, or W-creds. Moreover, aiding governments in establishing a new regulatory system prevents individuals or groups from identifying Wellspring as a monopoly. Henry fortunately has a bit of good news. His pal Kevin inadvertently discovers that Henry’s algorithm (his idea that the patent office dismissed) generates quality music, including rather poignant lyrics. Though its original purpose was entirely different, it turns out the algorithm might be better at maximizing business productivity than Wellspring. This could precipitate serious competition for Wells’ company, regardless of Henry’s reluctance to monetize his algorithm. Despite much of it resembling a cautionary tale of a technology takeover, Goorha’s story is persistently amusing. This, in large part, is courtesy of Henry’s first-person account. He has a tendency to interrupt people, sometimes with a mere thought or, as in one scene, by munching loudly on a piece of toast. But while he may be an annoyance to other characters, he’s a veritable comic gem as a narrator. In one scene, Henry finds friend Stephanie’s presentation on Botzecs so tedious he counts the bricks in a wall and ducks out for a coffee. He still manages to drop snippets of insight, even when he’s verbose: “You cannot look kindly on a friend who asks you about the make and design of the dagger stuck in your back, when you are telling him how profusely it makes you bleed.” The story, meanwhile, steadily progresses, complemented by a refusal to either laud or rebuke technological advancement. Wellspring, for example, does occasionally provide humans with paid positions, while a few sympathetic characters may be more avaricious than they initially appear. Lighter narrative touches are further improvements: Henry’s older brother, Guy, makes not a single appearance but displays a bold personality via reports of his insults (simply seeing Henry evidently turns his stomach). The ending befits the story’s overall subdued tone; it’s quiet but indelible, a denouement steeped in irony and a weighty notion or two for readers to ponder.

A prospective technology-driven future enriched by an endlessly funny protagonist.