Qwantu Amaru has been writing since the age of 11. An avid reader, he has always aspired to write suspenseful page turners and socially significant literature like those of his writing influences Richard Wright, Harper Lee, Walter Mosley, Tananarive Due, Anne Rice, Wilbur Smith, Michael Connelly, Dan Brown, Brandon Massey, and Stephen King. Qwantu draws his inspiration from his modest upbringing in small towns and cities across the US as well as experiences living abroad in Brazil and Turkey. In addition to his first novel, ONE BLOOD, Qwantu has published five volumes of poetry and produced one Spoken Word Album. Qwantu is an active member of the outstanding socially active poetry collective Black on Black Rhyme out of Tallahassee, FL. He is also part owner and one third of The Pantheon Collective, an independent publishing venture dedicated to bringing high quality independent books to the masses while empowering and inspiring other authors to follow their dreams. In November 2012, Qwantu launched AuthorDiscovery.com, a website and author services company with the aim of making it easier for good authors to get discovered by readers. Qwantu currently resides in Istanbul, Turkey while researching his next thriller The Uneasy Sleep of Giants.

“One Blood is a gutsy book that blazes trails, plotted at breakneck speed that won't let up.”
– Kirkus Reviews 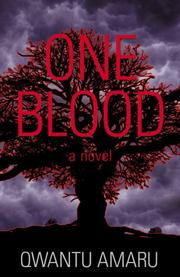 A governor and his sordid past are at the heart of a tale of retribution in Amaru’s stunning debut novel.

When Karen Lafitte disappears, her father, Louisiana governor Randy Lafitte, is initially skeptical of the ensuing ransom note. The governor believes that he’s responsible for his father’s death years earlier, resulting in a curse that’s been passed down the Lafitte line. He’s particularly concerned that his daughter is now the same age as his son, Kristopher, was when he was killed—18. In fact, in addition to money, the ransom note demands the pardon of a lifer, Lincoln Baker, who was imprisoned for the murderer of Randy’s son. What follows is an elaborate pattern of revenge involving multiple parties that delve into the Lafitte family history and Randy’s dark road to an elected office. Amaru’s greatest achievement is a nonlinear story that still manages to be clean-cut and precise. The plot bounces readers from one time period to another—flashbacks sometimes occur during other flashbacks, and dream sequences meld into memories and back into real time. Despite this narrative style, the story is, surprisingly, never perplexing. Amaru skillfully manages this feat by presenting uncertainty—such as Lincoln’s relationship with a man named Amir—but immediately clarifying it with prior events, complete with a time stamp. Similarly, voodoo and many appearances of loa (spirits) are treated sincerely, not merely as wacky, otherworldly manifestations. The thorough examination of peoples’ pasts allows for sharp, distinct characters. This heightens the tension between characters engaged in high-pressure situations, of which the author has ample supply. For deep-rooted characters immersed in violence, the novel’s defining moment may be a wounded man reciting the Lord’s Prayer aloud while dodging bullets in a blistering gun battle.

A gutsy book that blazes trails, plotted at a breakneck speed that won’t let up.

The Lord of the Rings

The river lay heavily upon the desert, bright as a spill of molten metal from a furnace.

Empowering myself and others