Author/illustrator, Gary Raham, loves to bring science alive—especially paleontology—through his writing and illustrating work. He has written (and in some cases illustrated) 18 titles of science fact and/or science fiction. He writes science columns for The North Forty News and Colorado Gardener Magazine and serves as Assistant Editor for Trilobite Tales, the newsletter of the Western Interior Paleontological Society. Kirkus describes his most recent title, Confessions of a Time Traveler (Penstemon Publications, 2015) as a "well-rounded collection (that) testifies to the riches gained by sustained dedication to scientific inquiry." 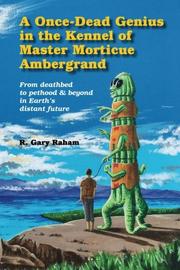 Long after an asteroid nearly erases Earth’s civilization, an artificial intelligence guardian and the archived intellect of a genius must deal with the arrival of large, caterpillarlike alien colonists.

In this sci-fi novel, much-married Albert “Rudy” Rudyard Goldstein earns wealth and esteem for helping heal Earth’s abused environment. Near death, the brilliant but cantankerous fellow rejects having his neural matter uploaded and his mind rendered practically immortal. But after he dies, a doctor and his cousin, an AI expert, do it anyway. Rudy, mildly annoyed, finds himself a disembodied consciousness entrusted to a resourceful, self-sustaining AI computer presence called Mnemosyne (whom he nicknames Nessie). Rudy eventually has a diversion, as an asteroid collision mostly ends terrestrial civilization. A million years later, Rudy, Nessie, and their mound-shaped complex are Earth’s last remnants of advanced technology. The local, primitive tribes worship Nessie as a goddess. In these diminished circumstances, humanity finally has alien first contact with a race called the Jadderbadians. They are tall, segmented, caterpillarlike creatures, not really evil but disposed to regarding Homo sapiens as little more than pets and slaves (if the name Arrogant Worms didn’t already belong to a Canadian band, these beings would have it). When Nessie’s surveillance drones are discovered, the stage is set for a confrontation. Jadderbadian scientist Morticue Ambergrand—slightly more broad-minded than his cohorts—makes Rudy’s acquaintance in a startlingly close way. Raham (Confessions of a Time Traveler, 2015), prolific in generating science books for school-age readers, turns his considerable talent and vision to a grown-up, seriocomic sci-fi narrative. The arch tone should remind readers of Kurt Vonnegut, although Raham is better grounded in exobiology and science and displays a more upbeat outlook for the human (and nonhuman) condition in this engaging tale. That said, hard-sci-fi fans may cock an eyebrow over how the author introduces the planetwide conscious entities, Gaia (for Earth) and Hydra (the corresponding spirit of Jadderbad), who also take active roles. The result is a bit like Arthur C. Clarke’s big-think mind stretchers, laden with wisecracking insults and the occasional dirty joke. 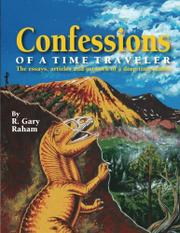 Confessions of a Time Traveler

In this diverse collection of essays, short stories, illustrations, anecdotes, and other missives, Raham informs without being dry and teaches without being pedantic while covering a wide range of subjects in biology and the history of science.

The project of making sense of human existence may be endless, but you’ve got to start somewhere. In one piece, Raham explains how the story of the evolution of life on Earth is intimately related to microbial development. An obituary for a revered scientist sheds light on the value of her discoveries, translating them into everyday speech while capturing the personal significance of her work for Raham. “Alive & Aloft in the Aeolian Zone,” a combined essay and interview with science professors, describes the role played by the wind in creating and sustaining the planet’s complex aerial ecosystem. Other pieces discuss metamorphosis, Thomas Jefferson’s interest in the study of fossils, and the momentous discovery of arrowheads by Loren Eiseley in the 1930s. Also included are captivating excerpts from original works of sci-fi and adventure following “a dynasty of outstanding fossil hunters….Like me—and most paleontologists—the Sternbergs became captive to the lure of finding worlds lost in the catacombs of deep time.” Raham’s striking illustrations figure prominently throughout, varying in style from pen-and-ink sketches and cartoons to colorful, otherworldly paintings of tiny life forms. What’s more, comments from Raham preface each piece in the collection, providing context and background, which adds a personal touch and something of an overarching narrative to the book. Overall, the well-rounded collection testifies to the riches gained by sustained dedication to scientific inquiry, an enterprise that involves patience, persistence, and original thinking. Though the pieces differ in style and intent, the general outlook is broadly humanist, emphasizing the importance of scientific experimentation as a fundamental component of our collective self-understanding as a species. And yet this enthusiasm is tempered by humility about our place in an incomprehensibly large cosmos.

A welcome excursion for pop-sci fans featuring a number of striking artworks.

ambidextrous in some sports

To generate a sense of wonder in the next generation

Ryan Thompson, on a dig with his grandfather, Pops, and girlfriend, Skeets, discovers a new species of mosasaur that he believes will jump-start his career as a paleontologist and fulfill a fortune teller's prophecy. He also finds a strange silver sphere among the ribs of his fossil containing Siu, a 70 million-year-old alien intelligence intent on finding her mate, Ito, and transforming Earth into a replica of her own long dead world. Ryan struggles with Siu for control of his body and his future while other forces emerge that threaten the integrity of much more than one world. Conflicts transform into deadly compromises, with consequences that will change the universe forever.
Published: Oct. 30, 2011
ISBN: 978-1468005004

Students will discover life science adventures in their own backyards (or school yards) with this new resource! After reading brief descriptions of fascinating creatures, they participate in hands-on explorations with exciting classroom and field activities. Using drawing and writing skills, they record their experiences in a Naturalist's Notebook, which helps them make further discoveries. The author offers activities in four areas of natural history-size, scale, and the world of the very small; predator-prey relationships among animals; animal communication; and the ecology of living communities, including their human members. The activities can be integrated with other curriculum areas, used to supplement the science program, or be used as springboards for science projects. By emphasizing the process of drawing and combining it with study of an area that teachers and students may think difficult, this book offers a fun and user-friendly approach to science. Grades 4-6.
Published: May 15, 1996
ISBN: 978-1563082542

The literature of science fiction packs up the facts and discoveries of science and runs off to futures filled with both wonders and warnings. Kids love to take the journeys it offers for the thrill of the ride, but they can learn as they travel, too. This book will provide you with: an overview of the past 500 years of scientific thought and the literature of science fiction which it inspired; suggestions for finding and adapting the kind of science fiction that will work best for your classroom; detailed ideas and resources for teaching concepts in the physical, earth, space, and life sciences, as well in history and mathematics; and suggested activities for a variety of grade levels. Appendices provide: science references to help you keep the facts and the fictions straight; national science content standards; and detailed lesson plans for an earth science unit where students travel the depths of time and create their own time travelers' diaries.
Published: Aug. 17, 2004
ISBN: 1-56308-939-4

This suspenseful story about the Olifee family's journey back to the Precambrian era will enthrall readers while teaching solid earth science concepts.
Published: Oct. 12, 2000
ISBN: 1-55591-415-2

A mysterious time traveler, identified only as J, explores the Great Interior Seaway of North America 67 million years ago in search of the creatures that transformed a world. Color covers surround elegant black and white illustrations and text reminiscent of naturalist, Loren Eiseley.
Published: Oct. 1, 2010
ISBN: 978-0-9626301-1-8

Every rock you see tells a story about the Earth. Glassy black rocks mark moments when the Earth's liquid insides spilled out onto its surface. Gritty, sandy rocks are the dead skin of the Earth, shed after years of wind and rain. Twisted, sparkly rocks formed deep in the bellies of mountains. In "Rocks and Minerals", young readers will learn how to read the 'story' of a rock by examining its mineral makeup and how to identify minerals by their color, shape, shine, special powers, and even taste. Students can then use their knowledge of rocks and minerals to understand how the Earth works.
ISBN: 978-0-79109703-8