R. R. Reynolds was born in Phoenix, Arizona, but grew up on the beaches of Santa Monica, California. Eventually the polders of the Netherlands beckoned him to live below sea level. After stints working in Denmark, India, and Nepal, he ended up living a snowball's throw from the Arctic Circle in northern Sweden. Upon returning to the United States, he enjoyed ten years defrosting under the south Florida sunshine. Lilapsophobia drove him to Milwaukee, Wisconsin, where he found his new home and life as a certified Green Bay Packers-loving, Badger-rooting, brat-eating Wisconsin Cheesehead.

“One of the best paranormal fantasy releases of this year—a self-publishing benchmark.”
– Kirkus Reviews 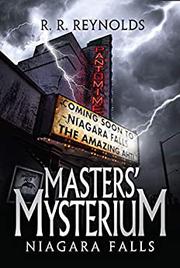 This third installment of a fantasy series finds Lucifer, disguised as a senator, preparing to take over the United States.

Sixteen-year-old Bailey Tannahill is a self-professed “tomboy” who loves hunting. She lives with her 19-year-old brother, Ian, and their parents, Brian and Linda, on a compound in the wilderness near Youngstown, New York. While trying to capture muskrats on the Miller property, Bailey witnesses a bright light and hideous winged creatures. These are demons that answer to Satan, who currently possesses the body of Sen. Bill Stevenson. When Brian, a hardcore survivalist, learns about Bailey’s sighting, he insists the family drive to Las Vegas, where angels recently defeated some demons. Ian stays in New York in hopes of working at the Pantomime Theater with the Amazing Ahti, an alcoholic magician. In Las Vegas, the Rev. Jay Masters wants to expand his Mysterium franchise to showcase the surreal battles between angels and demons that he and his daughter, Trudy, have experienced. Trudy, pregnant with her husband Gavin’s child, can now see the heavenly “ladders” by which the angels travel. She’s not the only person to display a strange, new power. Ian has been making small objects vanish, a harmless skill until he accidentally casts Bailey into the unknown. In this volume of Reynolds’ (Masters’ Mysterium: Las Vegas, 2015, etc.) quirky series, the author nudges Masters and Trudy out of the spotlight to make room for the Tannahill siblings. Their teenage struggles are well illustrated. Ian wants to be a lighting technician, not a survivalist like his father; Bailey, meanwhile, undergoes a heartening change when the power to communicate with animals manifests, forcing her to question a blind acceptance of hunting. And no story in which the devil possesses a politician would be complete without amusing lines like “Many senators tried to live on their meager $174,000 income without success.” Stevenson’s plot to found the Academy of Peace and Justice feels constrained by Reynolds’ large cast and the rotating tableaux that feature them, but the author’s wicked sense of humor remains intact. 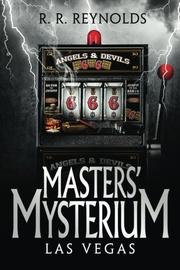 This rousing sequel to Reynolds’ debut novel (Masters’ Mysterium: Wisconsin Dells, 2013) continues a paranormal fantasy saga chronicling the epic battle between angels and demons and the humans entangled in their war.

After what happened in Wisconsin Dells, the world now knows of the existence of angels and demons. With the ladder (the angels’ means of traveling to and from Earth) in Wisconsin Dells destroyed, the primary mission for the humans involved in the angels’ plight—like former waitress Trudy Masters and her husband, Gavin, who now has the ability to heal others with his touch—is to somehow quietly relocate an entire town to a new location: Calamity, Nevada, 30 miles outside of Sin City. But setting up a ladder in Calamity proves to be a dangerous venture, especially when a group of Vegas demons attempts to manipulate the situation to its advantage. The already volatile situation becomes even more complicated when Trudy’s father—who owns the museum of oddities known as Masters’ Mysterium—literally makes a deal with the devil. This saga is simply extraordinary on several levels. Reynolds takes the angels-vs.-demons genre—one filled with mind-numbing stereotypes and clichés—and creates a profound new mythos. His vision is unique, his characters well-developed, the pacing relentless. It’s paranormal fantasy, yes, but that shouldn’t dissuade readers disinterested in the genre. Powered by utterly readable writing and a diverse cast of characters for whom readers will undoubtedly cheer, this novel isn’t so much about angels and demons as it is about the people ensnared in the conflict and their own intimate journeys of self-discovery.

Like Charlaine Harris’ Midnight, Texas saga this is cutting-edge genre fiction that will appeal to genre fans as well as mainstream fiction readers. It’s a storytelling tour de force no matter the categorization. 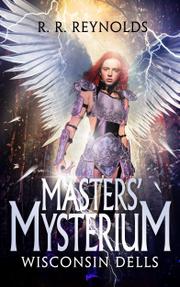 This extraordinary work of paranormal fantasy—a debut, no less—revolves largely around the morally bankrupt owner of a museum of oddities who attempts to reinvigorate his flagging business by capturing the Hodag, a legendary creature believed to inhabit the woodlands of northern Wisconsin.

The Rev. Jay Masters is a scumbag. A former faith healer, he currently owns Masters’ Mysterium—“a collection of every oddity, rumor, hearsay, improbable event, and conundrum created by nature or man”—a failing business in Wisconsin Dells that’s being overshadowed by nearby amusement and water parks. With few options left, he hires three hillbilly hunters to go into northern Wisconsin and trap a mysterious beast that has been rumored to be killing unwary travelers. But when two of the hunters end up ripped apart, the sole survivor ranting about aliens and monsters, Masters decides to visit the remote town of Creekside himself. There, he meets the town’s strange residents, including his 21-year-old daughter, Trudy, a waitress at the unfortunately named Cluck and Grunt restaurant; she’s not exactly happy to meet him for the first time. The mythical beast turns out to be a demon, and Masters and his daughter soon become entangled in a supernatural war between seraphic beings and the forces of evil. But this isn’t run-of-the-mill paranormal fantasy with angels. The characters are extremely well-developed, the narrative is intelligent and at times highly humorous, the storyline is original and engaging, and the religious aspects are decidedly understated. The first installment of a series, this is paranormal fantasy done right: a unique, relentlessly entertaining page-turner that will appeal to a wide range of readers. Fortunately, there’s more to come.

One of the best paranormal fantasy releases of this year—a self-publishing benchmark.