A. R. Shaw, born in south Texas, served in the United States Air Force Reserves from 1987 through 1991 as a Communications Radio Operator, where she served at the Military Auxiliary Radio System (MARS Station) at Kelly AFB, Texas.

Her first novel, The China Pandemic, (2013) climbed to #1 in Dystopian and Post-Apocalyptic genres in May of 2014. Hailed as "eerily plausible" and her characters "amazingly detailed," Shaw continues the engaging series in post-apocalyptic (SHTF) fiction.

She lives with her family in eastern Washington State, where after the deep snow of winter finally subsides to glorious rays of summer; she treks northeast to spend her days writing alongside the beautiful Skagit River.
You can contact A. R. Shaw directly at her website at (AuthorARShaw.com)

“The beginning of what could be a riveting apocalyptic saga.”
– Kirkus Reviews 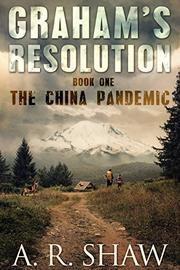 In the near future, 98 percent of the Earth’s population has been wiped out by a virus developed by the Chinese and inadvertently unleashed on the world. In the Pacific Northwest, one man, math professor Graham Morgan, finds the will to live.

Having lived through the nightmarish experience of watching his pregnant wife wither away and die, Morgan is now faced with the task of burying his beloved father. All alone in a world increasingly ruled by wild animals—and ruthless human predators—Morgan’s goal of making it to an old family cabin deep in the wilderness near a secluded lake is complicated when a woman leaves her 5-year-old son at his feet just before she dies. Morgan’s journey with the boy takes more than a few unexpected turns as they travel through the dangerous wasteland of what was once civilization. By the time they reach their destination, his group (which now includes 15-year-old twin girls whom Morgan courageously saved from the clutches of a madman) must come to grips with their new reality: Winter is coming, supplies are running out, and there may be a gang of killers living across the lake. Powered by adept character development and relentless pacing, this post-apocalyptic novel, the first in a series, doesn’t exactly have a particularly innovative storyline, yet the strength of characterization makes for a page-turning, end-of-the-world-as-we-know-it reading experience. Still, some aspects of the novel could’ve been much stronger: The description of the post-apocalyptic world is largely superficial, the expected horrific imagery and overall dark ambiance noticeably absent. On a larger scale, there’s no real thematic profundity. Nevertheless, readers will find Morgan to be an endearing hero at world’s end.

The beginning of what could be a riveting apocalyptic saga.

What the world dreads most has already happened. Now, there is only a quest for survival. In her dystopian and post-apocalyptic best seller novel, The China Pandemic, A. R. Shaw created a realistic world after a much too plausible pandemic event. Now, the remaining must not only survive but thrive or risk complete extinction. The thriller series moves forward with... The Cascade Preppers Graham is back in book two of the Graham's Resolution series. In the tiny town of Cascade, Washington, the members of Graham's camp endure a severe winter season. Meanwhile, The Prepper community remains dedicated to isolation and maintains their benevolent relationship. Tensions rise when tragedy strikes. The human traits of community and compassion are pitted against instincts to survive. Will they be doomed by their own efforts to coexist? Read the ongoing saga of Graham's Resolution, Book 2, The Cascade Preppers, for the startling revelation.
Published: June 8, 2014

What the world dreads most, happened. Now that they've begun to thrive, the true reason for humanity’s demise becomes ever more apparent. In her dystopian and post-apocalyptic bestselling novel, The China Pandemic, A. R. Shaw created a realistic world after a much too plausible pandemic event. Now, the remaining survivors must conquer their enemy more sinister than anyone ever guessed. The story moves forward with...The Last Infidels The survivors are back in book three of the Graham's Resolution series. In the tiny town of Cascade, Washington, the members of Graham's camp and the Prepper camp welcome spring and begin to thrive as a community. Meanwhile, dark forces invade the peace they've cultivated. A common benevolent enemy of the past emerges, and suddenly the pandemic wasn't what it seemed at all. Read the ongoing saga of Graham's Resolution, Book 3, The Last Infidels, for the startling revelation.
Published: March 1, 2015

What the World Dreads Most Happened and now Graham's group has found a way to fight back, but is it too late? And are their methods going too far in the name of humanity? Read the conclusion of the best selling series... Graham's Resolution, top 100 Best seller in Dystopian and Post-Apocalyptic fiction novels: A TEOTWAWKI, Prepper, medical thriller, fiction favorite, where surviving a terrorist weaponized pandemic means becoming less human and vengeance is a fight for absolute survival.
Published: Sept. 12, 2015