Rabb Marcellus has lived in various cities in the South and the West. He has a degree in Electrical Engineering Technology and has worked primarily in the electric power industry for most of his career. He began writing in his capacity as a project coordinator and project engineer, preparing correspondence for interoffice, as well as to clients. An avid reader, a love for the art emerged and he began to explore his capacity for writing and storytelling, completing his first novel, Without Warning, in 1985. The demands of his profession and raising a family hindered his writing until recently. In addition to his novel, Without Warning, he completed The Suns' Own Tomorrow in 2013, Jubal's Gold in 2014, and Prince of Tyrants in 2015. He is currently finishing a new book, Carina Three, the Other Side of Tomorrow, a sequel to The Suns' Own Tomorrow and has already developed ideas for a new novel. His favorite authors are Clive Cussler, Tom Clancy, and Larry Niven and his stories reflect their influence. Rabb tries to tell stories full of suspense that are never predictable. His characters are drawn from a lifetime of experiences, and each novel must be fun for him to write. He doesn't like to confine his imagination to a specific genre. "I like to tell a good story, one that my readers will enjoy," Rabb says, "and that is what gives me a lot of satisfaction." Rabb Marcellus' novels are available from Amazon Kindle electronic and in paperback copies from Createspace, also from Barnes/Noble Nook. Visit his website rabbmarcellus.com for more information or contact: rabbmarcellus@gmail.com 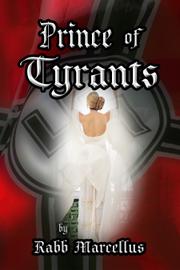 Marcellus’ (Jubal’s Gold, 2014, etc.) thriller considers the possibility that Hitler did not, in fact, commit suicide.

The story opens on Oct. 5, 2014, with Paul Keasler, a 93-year-old German, admiring his secret stash of Nazi memorabilia. It’s quickly revealed that Keasler’s true identity is Otto Beck, a former Nazi still faithful to Hitler. He began a journal in 1945, right after he was assigned to work closely with Hitler on a special project. While Keasler thumbs through the book, an assassin breaks into his home and kills him. That assassin belongs to a secret organization called Nakam (the Hebrew word for vengeance) devoted to hunting down Nazis who escaped Germany—and punishment—at the end of World War II. FBI Special Agent Frazier is assigned to the case and recruits the help of professor Michael Grayson, an expert on all things Nazi. With the help of Angela Brown, a young woman raised by Keasler but unaware of his nefarious background, Grayson tries to piece together the puzzle of the murder and its broader, historical implications. Alongside the narrative are excerpts from Beck’s journal, which discloses a plot to fake Hitler’s death before being trapped by invading Russians. Interestingly, Grayson always suspected this was true, but he lacked sufficient evidence to prove it. Now that they’re in possession of the journal—Keasler had put it back into a hidden drawer before his demise—Grayson and Angela are zealously pursued by Nakam vigilantes, who have a deadly agenda of their own. Flashes of violence punctuate the briskly paced action; however, while readers will never want for clarity, dialogue can be stiff, even halting: “ ‘I don’t like this,’ he whispered. ‘Just walk, don’t run anymore and act normal.’ ‘Normal? I don’t know what that is anymore!’ she replied.” The novel revolves around an outlandish historical hypothesis—what if Hitler got away and still lives?—but sometimes that outlandishness pushes the envelope even further: might there be a treasure map in that journal? As such, the plot aims for—and hits—entertainment rather than stark realism.

It was 1864, and the Union army was advancing south toward Dahlonega, GA where the Confederate States of America had stored 2000 pounds of gold bullion. Captain Jubal Rawlings' mission was to hide that gold from Union forces in a place of his choosing and then return with his troops to Dahlonega--but he never came back! One hundred and fifty years later while prospecting for buried treasure, Nick and Jackie Dixon uncover a jar with gold coins and a letter. The letter cites a possible location for the lost Confederate gold. Their decision to research the facts, and follow the clues, would change their lives forever.
Published: May 2, 2014
ISBN: 9781499231489

Angela Brown's guardian has been keeping secrets. Now, she has a problem with her heritage, one that could change the history of World War Two and the end of the Third Reich! Marcellus’ thriller considers the possibility that Hitler did not, in fact, commit suicide.As such, the plot aims for—and hits—entertainment rather than stark realism. A fun, fantastical adventure in historical revisionism.
Published: July 27, 2015
ISBN: 9781515296676

The Suns' Own Tomorrow

The year was 2352. The discovery of naturally occurring wormholes had allowed the exploration of other solar systems within our galaxy. The search for an Earth-like planet had begun. After one hundred years of exploration, that planet was found! Unfortunately, the humans were not the only species in the galaxy capable of advanced technology and exploration. An alien species of enormous military potential and in urgent need of more planets to colonize has found the same planet and they intend to take it!
Published: June 1, 2013
ISBN: 9781490998824

Without Warning, a cold war thriller, was first written in 1985 when the threat of Mutually Assured Destruction was very real. Communism vs. Capitalism was a high stakes standoff. Anti-ballistic missile treaties were fashionable and a first strike by the Soviet Union, a possibility. World stability hinged on being able to detect and make a decision to respond to a missile attack. About twenty minutes was all the prevented total destruction for either country. What would happen if the United States had no warning time?
Published: Feb. 19, 2013
ISBN: 9781482540628