An award-winning author and editor, Ralph Reynolds has published fiction and
non-fiction books. He has written widely about sports, nature, economics and agriculture. His writing has appeared in periodicals ranging from The Wall Street Journal to The Saturday Evening Post. Ralph currently lives in Pinetop, AZ and grew up on a working ranch in New Mexico.

“While (Reynolds) hasn’t found the mother lode from which the placer deposits came, he’s struck gold with his tale of “blood and guts, hope and hardship, dust and disappointment.”
– Kirkus Reviews 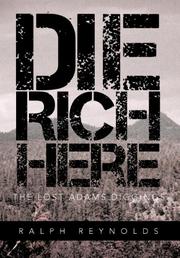 Reynolds’ account of a lost-mine legend of the Old West and the gold fever it has sparked.

The Old West is a mother lode of colorful nonfiction, truth often obscured by layers of myth. Reynolds taps a particularly rich vein of lore in his riveting recap of “what has become the greatest, most vexing, and persistent lost-mine tradition of North American history.” The Lost Adams Diggings are named for John R. Adams, who, in 1864, escorted by “a half-breed Mexican-Indian with a crumpled ear,” led an expedition of 21 miners that apparently found nuggets of placer gold somewhere in the remote Mogollon Breaks straddling the border of New Mexico and Arizona. Apache raiders slaughtered 19 of the miners, leaving only Adams and one other man to tell the tale. According to Reynolds, another prospector, John Brewer, was actually the first to find the gold deposit three years earlier. His party, guided by the same “half-breed,” also fell afoul of the Apaches. In the 1880s, Reynolds says, he returned to the diggings and mined out what was left, making himself a tidy fortune. But ever since, a parade of gold seekers has been gripped by “Adams fever”; many have met an untimely end in the wilderness. Reynolds memorably chronicles this cast of characters with an eye for detail. The quest of Capt. Mike Cooney ended in November 1915, “his tongue as stiff as a piece of jerky.” Hackberry Campbell had “two burros—one carried grub, the other, whiskey. Sidekicks said he often ran out of the first but never the latter.” For Reynolds, the Lost Adams legend “helps define the history of the deepest corner of the great Southwest,” and he skillfully follows the historical threads, including the Apache wars that coincided with the expeditions of Brewer and Adams. The Apaches, he says, attacked the miners not for their gold, but for their supplies, particularly guns. Reynolds, a native of the Mogollon Breaks, has been researching the diggings for 60 years. While he hasn’t found the mother lode from which the placer deposits came, he’s struck gold with his tale of “blood and guts, hope and hardship, dust and disappointment.”

With a memorable cast of characters and telling detail, the author explores the “greatest lost-mine tradition of North American history.”

Growing Up Cowboy Confessions of a Luna Kid

Coming of age in the rugged and unforgiving Southwest may not suit the faint-of-heart, but it is the perfect landscape for a compelling and humorous memoir of a lad who endured a mid-1900s cowboy upbringing in rural Arizona and New Mexico. Growing Up Cowboy chronicles the foibles and fortunes of its author, Ralph Reynolds (a.k.a. Luna Kid), in an engaging and heartfelt fashion. From wrangling ornery critters to finding first love, the Luna Kid confesses all and regales the reader with vivid stories imparted with an abundance of wit and humility. So saddle up and ride along as the Luna Kid introduces you to a helping of the Southwest’s fascinating terrain and colorful characters. And along the way shows you the irreverent side of adolescence adventure and the human side of growing up cowboy.
ISBN: 1466952822

In this bittersweet visit to a simpler time in the American Southwest, Ralph Reynolds crafts a fictional story based on an old oral tradition that the Wild Bunch, an outlaw gang, invaded a New Mexico village near their hideout and shot up its Mormon church. Sparks fly when church bishop, Jim Nathan, a former lawman, confronts the gang and its leader, Butch Cassidy (a notorious fallen Mormon). Another of the outlaws, Clem, becomes smitten with the church beauty, named Deseret. He leaves the gang and joins storyteller, Scottie Abner, and Deseret in a dangerous attempt to halt a cattle drive that threatens the area. High adventure and suspense follows. There’s a dramatic face-off between Bishop and Butch when the gang finds a need for Clem and comes back to get him.
ISBN: 1426995199

In The Killvein White you’ll meet a dedicated snow ranger confronting not only the travails of his present situation, but ghosts from his past; a sexy, smart statistician struggling to be heard in order to avert the pending disaster; a tough and cynical engineer who discovers a skeleton lurking in his closet and a plethora of fully realized characters who are forced to contemplate their mortality and morality. The Killvein White sets this truly human drama against a cruel and icy landscape. But by the time the thaw arrives redemption and forgiveness may rule the day….for some.
ISBN: 1426951043