Richard Ferguson's latest book, Blue's Point, was selected by the editors to be featured in Kirkus Reviews 9/15 Issue. Comments include: "... a meditation on what stirs men and women's souls and a thrill-ride – a rare combination." "No-holds-barred writing and great, complex characters." "I was reminded of Harper Lee's TO KILL A MOCKINGBIRD." Ferguson lives in Mexico with his best friends, Churchill the friendly pit bull and Hamish whose canine ancestry is a mystery. He's the complete Renaissance Man. He loves to compete in sports (he ran on a national championship cross-country team at the university level), and his passions include astronomy, wine, mycology, M-theory, travel, and music -- and they all enrich his writing. He's a member of Mexico Mensa. He is currently working on a novel about a crippled boy who wants to be an Olympic marathon champion.

He's traveled the world and, at one time or another, written for Billboard, Sports Illustrated, various newspapers, The Stars and Stripes, advertising, gourmet magazines, financial magazines, and sold film scripts. His short fiction is in anthologies. He has also appeared on radio and television programs. 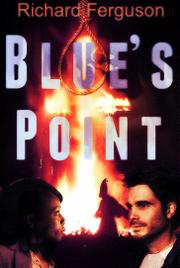 In Ferguson’s (The Thin Line Between Life and Death, 2013, etc.) thriller, a just-released convict and a journalist travel to a small Texas town where racial tension breeds contempt and violence.

Steve Cox returns to Blue’s Point 10 years after his conviction for killing a black man. The prison released him into the custody of old Jim Blue, whose family has owned Blue’s Point and neighboring Freedman’s Town for decades. At the same time, black magazine writer Mykeisha “Mike” Ali rides into town, planning to expose Blue’s Point as a cesspool of racism where the Klan and skinheads run rampant, threatening (and sometimes killing) black people. Both Steve and Mike, however, may be a hindrance to a diabolical plot already underway, and there are men willing to resort to murder to keep the two quiet. Ferguson firmly establishes the story’s racial theme. Mike, for instance, is attacked by skinheads simply for stopping to get gas, and it’s abundantly clear that Freedman’s Town is a community for the blacks unwelcome in Blue’s Point. Ferguson fortunately allows the theme to enhance the novel rather than drive it. Steve, for one, is invested in finding out who killed his father, who had been the Klan’s Grand Dragon, and he quickly learns that the murder that sent him to jail may have been a frame job. The villains, like the repugnant Tommy Saunder, reveal different levels of racism, some derived from ignorance, some from pure hatred. Steve is likable almost instantly when he saves a puppy from a discarded sack in a creek (courtesy of Tommy). Mike, too, is a laudable character. She’s nearly relegated into a supporting role in the suspenseful final act and a little too reliant on Steve while both are fleeing the Klan, but she’s admirably defiant even in the face of danger. Ferguson further augments his tale with drama—e.g., unresolved issues with Steve’s high school football pal, police chief Champ Lee—a hint of romance between Steve and Mike, and a surprising amount of mystery: whoever framed Steve for murder may very well be trying to do it again.

Respectful and astute handling of serious social conflicts in a satisfying yarn.

Hard to narrow down to one -- since I knew him for a short time and admired him, Ken Kesey.

Again hard to narrow down. Since I named Kesey, One Flew Over the Cuckoo's Nest.

Perhaps Randall Patrick McMurphy in One Flew Over the Cuckoo's Nest when he says, "At least I tried."

Favorite word? That's like favorite color -- they're all good in the right setting.

No one in Mexico has yet beaten me at snooker.

I could choose writing since I've always written, but I'll say learning about this fantastic universe we live in.

Especially for the horror gourmet, Richard Ferguson has prepared another heaping helping of heart-pounding terror, this time flavored with a healthy sprinkling of science fiction. If you read the first WEIRD TALES, you know the entrees will always be flavored with evil spices. THE BAD REVIEW -- Everyone who has ever gotten an undeservedly mean review will appreciate the predicament of Vishnu. THE ELEVEN DIMENSIONAL MAN -- Elkanah Jones was just an ordinary college professor until Millie showed up and introduced him to the wild side of the universe. MALFUNCTION -- Sometimes you only have to wake up to discover the other side of life. REVENGE -- Marriage can be tricky. EL SOL -- Beware Mexican legends. Richard Ferguson, the master chef, has laid out another table of bizarre tales brewed in the outer limits of a great imagination. Enjoy at your own risk.
Published: Nov. 17, 2013
ISBN: ASIN: B00DFAOXZA

When those in the intelligence community gather to drink, they joke about the myth of the Oiorpata, beautiful assassins trained in seduction and programmed to kill using firearm, knife, bare hands, or a myriad of seemingly benign objects with equal ease. The Oiorpata have practiced their deadly art undetected. Until now. The United States and the western world have won the Cold War. Or have they? When Ben Gordon, CIA Station Chief, sets out to recreate a blown network of agents, a minor KGB clerk tells him of a mole in the highest ranks of the CIA. Ben sets out to identify the mole and along the way meets a woman who helps him, or does she? The more Ben learns of the plot, the more enormous it becomes. Every discovery proves to be ephemeral, vanishing to reveal something more monstrous and far more dangerous. Behind it all, Soviet Spymaster Alexei Karkarin uses the world as a chess board, now feinting a move, now sacrificing a man to gain a queen, always anticipating the future, and with one goal. To conquer the world. Their memory erased, programmed to hear and obey only the Good Words, the Oiorpata are perhaps the most deadly creatures ever imagined. The woman known as 57-J is the best. Except for one little thing. Of all the Oiorpata, only she retains a wisp of memory.
Published: Dec. 9, 2013
ISBN: B007WG427M

Richard Ferguson serves up a gourmet's delight of living, walking, shrieking nightmares. If you are a connoisseur of heart-pounding terror accompanied by a side dish of the eeriest of whimsy-tales brewed in the outer limits of a great imagination, you couldn't ask for a more frightening menu. Richard Ferguson has prepared five of his most unsettling short pieces -- bizarre tales of dark doing and unthinkable acts where horror and madness take on weird, unearthly forms . . . where indistinct shapes in the dark and bumps in the night are always signs of something dreadful on the prowl. The settings are familiar and unsuspected. RUM AND HORS-D'OEUVRES -- One would hardly think two bankers relaxing on a porch would attract the forces of evil . . . unless one of them practiced the dark arts of Haiti. THE GENEALOGIST -- When Harry Poindexter sets out to learn about his ancestors, he has no idea what malevolent forces he will unleash. THE NIGHTRIDER'S SONG -- Doctor Vodun and The Mambo Sisters find out loose lips can sometimes do more than sink ships when their rock group heads for the next gig. LI FAN'S CAMERA -- Johnny Corbett discovers that sometimes crime not only doesn't pay, it can unlock an unfathomable surprise. BAEL STUMPE -- When Bael meets his father after thirteen years, he enters the world of madness. In Richard Ferguson's cookbook, the entrees are always flavored with evil spices.
Published: Nov. 17, 2013
ISBN: B007EELLTE