Richard K Caputo held full-time faculty positions in three schools of social work for a total of thirty-two years until retirement as tenured full professor of social policy and research at the end of May 2019 from the Wurzweiler School of Social Work, Yeshiva University in New York City. Before becoming an academic in 1987 at the University of Pennsylvania School of Social Work, he served as the director of the department of research for a large family service agency in Chicago. Dr. Caputo obtained his PhD in 1982 from the University of Chicago, School of Social Service Administration. He earned his MSW in 1978 from Arizona State University and a MA degree in History in 1972 from Iowa State University. Raised in New York, he graduated from Brooklyn College in1970. He has authored numerous articles in peer-reviewed journals and served on the editorial board of several professional, scholarly journals, including the Journal of Family and Economic Issues, Families in Society, Journal of Sociology & Social Welfare, Marriage & Family Review, Journal of Poverty, and Race, Gender & Class. In addition to Connecting the Dots, Dr. Caputo has also authored Policy Analysis for Social Workers and US Social Welfare Reform: Policy Transitions form 1981 to the Present, and edited Basic Income Guarantee and Politics: International Experiences and Perspectives on the Viability of Income Guarantee, among other books. In 2015, he was recognized in the "Status of Women in Social Work Education Mentor Recognition Program" at the Annual Program Meeting (APM) of the Council on Social Work Education, held in Denver, CO. 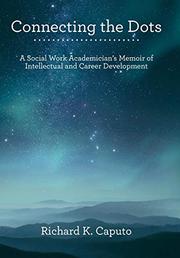 Caputo’s (Social Policy and Research/Yeshiva Univ.; Policy Analysis for Social Workers, 2014, etc.) memoir chronicles his intellectual development, as well as his career in social work and the academy.

The author was born and raised in Brooklyn, New York, as one of eight children. Although neither of his parents graduated from college—and his mother never finished high school—they encouraged him in his academic pursuits, and he eventually earned a doctorate in the history of social welfare from the University of Chicago. The author’s self-described “intellectual biography” charts several different trajectories of his personal development. For example, until his early college years, Caputo considered himself a “devout Catholic” but gradually adopted a spiritual version of “secular humanism,” influenced by such thinkers as Friedrich Nietzsche, Karl Marx, Fyodor Dostoevsky, and 19th-century philosopher Ludwig Feuerbach. Nevertheless, he remained true to values that he sees as being at the core of Christianity—the individual dignity of each person, the universal humanity that binds us all together, and the responsibility to help those in need. The author worked as a social worker and as an academic, always looking for ways to balance his activism and advocacy with his commitment to research. He reveals how even his intellectual life attested to the tension between praxis and theory, as he was always looking to achieve “better balance between impartial scholar and public intellectual” in order to become a better “academic citizen.” Throughout this memoir, Caputo shows notable philosophical breadth, and he intelligently discusses a broad spectrum of topics, including welfare policy, caregiving, the implementation of a basic income guarantee, compassionate conservatism, and Allan Bloom’s landmark 1987 book The Closing of the American Mind. His enthusiasm for his work is obvious and infectious, and he truly seems happy doing “what I do best, namely conceptualize issues, read books, and teach students.” Also, he openly discusses his various frustrations over the course of this remembrance—not only with specific social policies, but also with his own occupation. He admits, for instance, that writing never came easy to him, despite the fact that he was prolific, and that, at one point, he fretted that he “had exhausted my intellectual and scholarly potential.” However, this book buries the reader in needlessly granular detail about such topics as the various schools the author went to, the classes he took and taught, the positions he held, and the books and articles he wrote; as a result, his memoir often reads like a narrated curriculum vitae. (It concludes with an appendix of publications and conference presentations.) He also quotes his own journals at great length; he even comments, in his diary, that he should become a more faithful diarist. One can’t help but wish that he’d written more about the novel that he once worked on, or about his self-described “disco-driven pothead social life in the mid-1970s”—which he discreetly withholds from the reader to avoid “embarrassment.”

A thoughtful, often engaging account of a philosophically vital life, but overburdened with mundane details.

"...who in all hsitory had ever waged war without falsehoods?" from Wide is the Gate (A Lanny Budd novel by Upton Sinclair)

Offers a comprehensive step-by-step guide to understanding the process of policy development and analysis of advocacy. Provides a user-friendly model that helps students get excited about understanding policy a product, process, and as performance, a unique "3-P" approach to policy analysis. Includes a distinctive "Case in Point" feature of concrete examples or applications of relevant concepts and skills needed for mastery of policy analysis, skill-building exercise at the end of each chapter, and an informative appendix, a historical overview of the institutional development of policy analysis, the policy sciences, and the role of think tanks.
Published: Oct. 4, 2013
ISBN: 978-1-4522-0327

U.S. Social Welfare Reform: Policy Transitions from 1981 to the Present

Examines the evolution of major Federal cash assistance programs to low-income families, from the advent of the Reagan administration to the early Obama years. Written for the professional (but not requiring expertise in quantitative analysis to understand it), U.S. Social Welfare Reform details which programs succeeded, analyzes why others failed, and highlights the need for further reform in the context of today’s economic climate. U.S. Social Welfare Reform: •Traces the changes from the Federal/state open entitlement AFDC program to the state-run, time-limited TANF initiative. •Explores the development of the Earned Income Tax Credit program. •Features two sets of National Longitudinal Survey data on EITC-eligible families. •Includes original results of outcome studies of youth participating in job training and education programs. •Evaluates the Obama administration’s social policy initiatives in meeting the challenges of the current recession. •Revisits previously rejected policies that would benefit low-income working families. The uniqueness of its scope and presentation suits U.S. Social Welfare Reform to researchers in family relations, family sociology, economics of the family, and social policy, whether the task at hand is reviewing past events or charting a future course of action.
Published: Jan. 20, 2011
ISBN: 978-1-4419-7673-4

Welfare and Freedom American Style: the Role of the Federal Government, 1941-1980

Traces the changing role of the Federal Government in the economy and society between 1941 and 1980. Examines the interplay between traditional American values and the development of the American welfare state. Analyzes in part how the government justified the use of fiscal policy to bring about improved economic conditions benefiting the country as a whole as well as on the ideal of equal employment opportunity benefiting targeted groups such as black Americans and women.