Richard Michael Levine is the author of a short story collection, The Man Who Gave Away His Organs: Tales of Love and Obsession at Midlife (Capra Press, 2015), and a poetry collection, Catch and Other Poems (Scarlet Tanager, 2015). His bestselling nonfiction book, Bad Blood: A Family Murder in Marin County (1982), was published by Random House and New American Library and has been translated into several languages. He has written magazine articles for many national publications, including Harper’s, The Atlantic, Rolling Stone, New York, The New York Times Magazine and Esquire, where he wrote a media column and was a contributing writer. He has been an editor or columnist at Newsweek, Saturday Review and New Times, received an Alicia Patterson Fellowship, and taught at the University of California at Berkeley Graduate School of Journalism. He lives in Oakland, California. 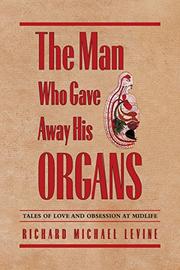 The Man Who Gave Away His Organs

Ed Kramer, the title story’s protagonist, is an unassertive man who for all intents and purposes is content with his wife, June, and son, Jeremy. But when Ed decides to become a repeat donor, starting with his bone marrow, he gives away more than tangible parts. His unequivocal happiness with the press and public admiring his “self-sacrifice” ultimately affects his family. Similarly, in “Tlac,” Deborah and Harry Ashe grieve in vastly different ways after the death of their son, Cal T., from a car accident. Deborah’s remembrance of her son is almost a religious experience, talking in a recovery group about the sights, sounds, and smells of Cal T. Not surprisingly, Harry’s contrasting despondency puts more than a strain on their relationship. Fortunately, not all of Levine’s tales are bleak. The opening “But Is It Art?” is a riot, in which Jade Frommer stuns her stepdad, Arnold, and mom, Norell, with a performance piece highlighted by audio recordings of her parents—things they might not necessarily want other people to hear. The subsequent “Jeopardy,” in the same vein, has only the appearance of despair. It tells the tale of college professor Jake Dubovsky, caring for ailing mother Edith, and a family devastated by her abusive husband. But there’s definitely hope: mother and son share elation in watching Edith’s favorite show, Jeopardy!, with host Alex Trebek representing “everything her husband had never been.” A couple of stories tiptoe close to surrealism without stepping completely over the line. In “Love and Death at the Golden Bear Recreation Center,” for example, Sommers, while swimming laps, mentally recites eulogies for people who aren’t dead though soon may be. Likewise, the narrator in “The Second-Tuesday-of-the-Month Irving Horowitz Support Group” meets with men of the same name. But it’s Ervin (“close enough”) who elbows his way into the narrator’s mind and home life, strangely knowledgeable about the mysterious Irving. Most stories, like “Art?,” have open-to-interpretation endings, but none is more jarring than the closing tale, “Becoming Burt Reynolds,” about the rise and fall of a celebrity look-alike. Strong characters and stories that, whether bitter or sweet, unquestionably elicit an emotional response.

The Man Who Gave Away His Organs: TALES OF LOVE AND OBSESSION AT MIDLIFE: Finalist, Eric Hoffer Award in Fiction, 2016

Catch and Other Poems