Michael Holm was born at Saint Joseph Hospital in Burbank, California, with NBC television studios on one side and the Disney film studios on the other. The world of imagination and creativity was destined to part of his life.
While celebrating with his family at their favorite restaurant, his young nephews removed some coins from a fountain sparking an idea so powerful, so exciting, Michael had to pursue it. With the help of his writer friend, Rick Foster, they completed a script based on that idea, which then led to the novel Matthew Patterson and the Wish Defenders.

Rick Foster is a writer, composer, musician, and dad from Chicago, Illinois.
He has been telling stories to his own children for three decades and finally decided to share one with the rest of Earth’s kids. This book – Matthew Patterson and the Wish Defenders!!!

“For their collaboration, Holm and Foster deliver a bouncy adventure with some exceptionally daring twists.”
– Kirkus Reviews 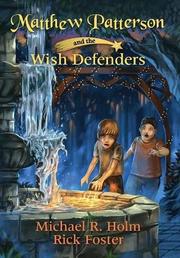 MATTHEW PATTERSON AND THE WISH DEFENDERS

In this middle-grade fantasy debut, the removal of pennies from a water fountain unleashes magical forces both good and evil.

Matthew Patterson’s 13th birthday isn’t going too well. Football tryouts are a disaster when school bully Dan Valdner trips him. Worse, the kindhearted Kelsey Robins can only look on while the coach boots Matthew from the field. Later, his parents take him and his best friend, Johnny Barnes, to the family’s favorite restaurant, The Inn of the Eleventh Ray. In the restaurant’s courtyard is a stone fountain featuring sculptures of odd creatures with “long arms, pointy fingers, and long, curling tails.” Matthew impulsively grabs three pennies from the fountain, little realizing that the act is noticed high above, and far below, the restaurant. In caves deep within the Earth, Bolterkein, ruler of the Wish Stealers, dispatches his agents—Glut, Sluth, and Tanger—to help steal the energy from the wishes that Matthew has placed in jeopardy. Meanwhile, on “the brightest star in the sky,” Empress Hopreme of the Wish Defenders responds with her own team: Nova, Dodd, and Byno. Their mission is to aid Matthew in returning the coins to the fountain within 24 hours or Bolterkein will be one step closer to escaping his subterranean prison. For their collaboration, Holm and Foster deliver a bouncy adventure with some exceptionally daring twists. First among them is that the wishes made with Matthew’s pennies are coming undone. WNBA all-star Judy Hughes loses her skills on the court, and the elderly Clay Williams finds that his wife, Edith, is once again gravely ill. That the third coin belonged to the protagonist’s parents—which sets Matthew himself unraveling—further jolts this creative story. Trim, capable prose transports readers, as when “Clouds slowly drifted by the pinkish-purple sunset....The planet’s surface was covered with large islands surrounded by turquoise-blue water.” After time spent at a water park and in a car chase, the narrative ties several threads together in a remarkable bow, highlighting the role of hard work in life.