Rick H. Veal was born sometime during the last half of the twentieth century in the upstate of South Carolina and has spent the majority of his life there. He joined the Navy immediately out of high school becoming an aircraft mechanic. During a six year span he sailed around the world four times and had the pleasure of visiting numerous different countries. He says of that time that he did about two thirds of everything there was to do and was accused of taking part in the other one third.
After returning home he attended The University of South Carolina graduating with a double Associates Degree with Honors. He completed his education at Presbyterian College in Clinton, South Carolina where he earned a Bachelor's Degree in History and Education. Since that time he has worked in the education field as a teacher and in various management positions in industry. He is now retired and currently lives alone sharing his home with his ‘daughter’, a twenty-five pound, seven year old Tuxedo cat who graciously allows him to think he actually owns the house. Her name is ‘Daddy's Pretty Girl’ but she will actually answer to anything except ‘Late for Dinner’.
Veal’s two favorite authors are Anne Rice and Clive Cussler. He enjoys Cussler's storytelling ability and Rice's attention to detail. He considers Anne Rice, The Grand Dame of Vampire Writers, to be the architect of the modern vampire genre. Her works are the foundation on which he and other current writers continue to build and expand the field. He believes that current writers of vampire lore owe her a huge debt of gratitude for laying that foundation. Clive Cussler, his other favorite author, is the quintessential American storyteller, one who is able to spin a yarn that draws the reader in from the very beginning. Both of them have a way of bringing their characters to life so that you feel as if you personally know them. Veal hopes that his readers will be able to see the influence of those two great writers in his writing as he tries to convey the same believability with his characters.
Veal has been a reader for most of his life and enjoyed much of what he's read. He has always enjoyed reading about and watching movies on the subject of vampires. He was completely hooked by Barnabas Collins in ‘Dark Shadows’ way back in 1966. After reading all the vampire books he could … Rice, Smith, Harris, Craine, Meyer … he decided that if they could write a successful vampire story, then so could he and he set out to do just that.
He determined that a setting rich in history and legends would be ideal for a paranormal love story. Charleston and the surrounding Low Country of South Carolina, replete with an abundant history of ghosts and the unknown, combined with the lore of Vampire stories just seemed to be made for each other. So tying the two together he formed the initial idea and built on it from there. The result of his efforts is The Epic Saga of The Master of Whitehall, a sweeping five volume narrative set in historic Charleston and the surrounding Low Country of South Carolina. His other works include Jennifer’s Ghost, a short story set in beautiful Beaufort, South Carolina and Hannah’s Heartache, a Master of Whitehall novelette, set in Savannah, Georgia.
It has been said that that if you wish to write, you should “write the book you want to read, and then others will want to read it too”. That is exactly what Veal hopes he has accomplished in his own writings. 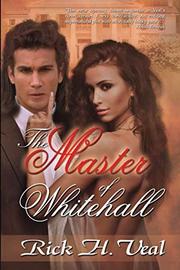 THE MASTER OF WHITEHALL

A college student falls for the mysterious owner of a manor in this first installment of a paranormal romance series.

Katelyn Corbin, 21, surrenders to an “unseen force” in a recurring dream she’s had since the murder of her parents. When Katelyn arrives on the campus of her new school, the “open gash” in her soul attracts the protection of enigmatic, handsome, and wealthy College of Charleston patron James Thomas Dubois. Katelyn quickly forms a strong attachment to James, whose long hair looks “more European than American.” Ever the gentleman, he includes Katelyn’s new dorm roommate and best friend, Alexis “Lexi” Gordon, on excursions to his lavish home, Whitehall Manor, a huge colonial plantation that he lovingly restored. James reveals his true nature as well as his growing feelings for Katelyn during a visit to his old friend Charlotte Ann in New York City: “I want so much to give her the gift,” James says of Katelyn. Back on the Whitehall grounds, a snake bites Katelyn, and James saves her life with his blood. Soon James reveals all to her. A long session of sweet sex later, she must decide between James’ two offers—amnesia or his gift of immortal life—not knowing her choice will directly affect whether Lexi lives or dies. The eerie opening dream sequence in Veal’s (James’ Journey, 2016, etc.) novel creates a sexy inevitability (“All of a sudden I became aware of an unseen entity close by, sharing the darkness with me. It radiated an invisible strength, as if someone, or something, was standing right beside me”). But the promising tale, which paints an evocative portrait of a conflicted heroine, runs aground because of vague descriptions and narrative repetitions. For example, Katelyn observes of James, “Everything about him spoke of great wealth but a nicely subdued manner,” without providing vivid details. Single events are rendered multiple times. Katelyn and James’ first lovemaking episode is recounted first in real time, second via her inner dialogue, and third via another intellectual rehash. While informational, the repetitions deflate the building tension and slow down this intriguing, otherworldly story.

An enticing supernatural plot with an initially frisky pace hampered by excessive exposition.

My passion in life is to help the less fortunate, primarily the homeless and the hungry. Nobody anywhere should be hungry. My goal in life is to establish a dining facility for the hungry and those in need.

In the long awaited prequel to The Epic Saga of The Master of Whitehall, Charlotte Ann Erickson has decided that at long last she must tell her story; one that is shrouded in the fog of myths and imaginations. It spans four centuries, and has been a closely guarded secret in the past. She reached this decision primarily because she feels it is long overdue for humans to hear some hard truths about the immortal world. Charlotte Ann bares her soul, giving insights into the life of a vampire. She was made in the days when life was cheap and immortals were hunters and killers. Look through her eyes as she relates her story, dispelling modern misconceptions of immortals. Step into her shoes and recognize humans as she does … creatures of no real importance outside of sustenance. Listen as she tells of her evolution over the centuries into a modern predator … and when her story is told, watch, as once again, she quietly fades away, back into the mists of folklore and fantasy.
Published: Jan. 17, 2017
ISBN: 978-0-9981044-3-0

Dale's Descent: A JOurney Into Darkness

Dale’s Descent begins in a small mining town in western Pennsylvania, where his mortal life begins and ends. Dale recounts his story, in a soulful manner, full of hurt and disappointment as he watches all of his dreams and aspirations suddenly fade away. His descent into darkness begins as he is forced into the life of a creature of the night; compelled to hunt and kill innocent people in order to survive. His journey spans decades of personal struggle in his search to find answers to why he was attacked and taken. Finally, left all alone, he wanders in a seemingly empty world, a lost boy – unknown and uncared for – searching for a way of escape. When Dale is discovered by the Charleston Coven, he is stunned by the revelation of an immortal life that was his all along. He begins to grow and mature with his new found family. He finds happiness and his life changes with the discovery of a teacher, a lover, and ultimately an eternal mate in this story of a boy that was lost and found again.
Published: Jan. 17, 2017
ISBN: 978-0-9981044-2-3

In this highly anticipated final installment, James Thomas Dubois, The Master of Whitehall himself, narrates his tale and brings the classic love story of the epic saga full circle. James recounts his journey, born in eighteenth century colonial Charles Towne and raised to be a planter like his father before him. Share in the joy when he marries the love of his life, making him complete. Suddenly widowed at the height of his happiness, he spirals helplessly into the depths of endless grief. Stand fascinated with him when Charlotte Ann bestows upon him the Gift of Life and reveals the true Fountain of Youth. Travel with him across the centuries as his transformation from human to vampire; untrained fledgling to powerful immortal unfolds. The story of James’ life, both mortal and immortal, illustrates the role Fate plays as it guides him toward that one special day in the twenty-first century that will forever change his life, and finally fulfill his destiny.
Published: Jan. 17, 2017
ISBN: 978-0-9981044-4-7

The Epic Saga of The Master of Whitehall continues with Lexi’s Legacy. Set in the historic cities of Charleston, South Carolina and Savannah, Georgia, Lexi’s story is one of discovery and growth as a shy and sheltered academic young girl faces the unknowns of an adult world. After receiving her life-long dream of teaching history in a European college, Lexi begins to settle comfortably into adulthood. She is happy and content with her life surrounded by other scholars at the University of Berlin. When she is suddenly and unexpectedly diagnosed with terminal cancer, her dream crumbles and her life begins to collapse around her … she shouldn’t be dying at twenty-two … it’s just not right … it’s just not fair. But amid the clouds of hopeless despair, a light begins to shine and a new world suddenly opens to her. Lexi discovers an unexpected cure from an unlikely source and two best friends become eternal friends. Lexi tells her tale of life, the despair of losing one and the joy of finding another, as she leaves behind her human life and begins her journey into a new immortal life. She recounts the changes that take place as she enters a supernatural world she never knew existed. Lexi discovers there’s much to learn about her new world as she joins Katelyn and James at Whitehall Plantation. Travel with Lexi as she takes you on an adventure of life changing proportions; watch as she grows and matures into the life of a fledgling vampire. Listen as she tells you about how her life changes … about love … found … lost … and found again.
Published: Jan. 17, 2017
ISBN: 978-0-9981044-1-6