Rick Odermatt spent three-plus decades as managing editor, sports editor and columnist at the New Haven Register. He was ghostwriter for Yale coach Carm Cozza’s autobiography True Blue, published by Yale University Press. He researched, designed and wrote coffee table books on the history of two country clubs and was editor of The Connecticut Golfer magazine for 10 years.

“The writing is, as one might expect, more than competent, and the characters remain well drawn …”
– Kirkus Reviews 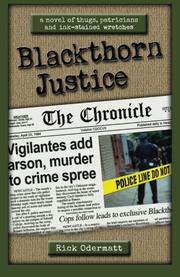 A debut crime novel brings together a severely conflicted newspaper editor, vigilantes and other bad guys, and the power brokers of the midsized city of Newcastle, Massachusetts.

Journalist Tucker Wattson is suffering for a number of reasons. Once a popular columnist for the Newcastle Chronicle, he eventually accepted a promotion to editor, and that job—chairing boring meetings, settling petty squabbles, jousting with the publisher—consumes him. Or maybe a large part of the problem lies in the midlife crisis he’s facing (he’s 44). At any rate, the married editor strays, meeting and falling half in love with the beautiful Lizbeth Saagen. Only later does he realize that she happens to be the current girlfriend of local bad boy Carl McSorley. Meanwhile, trouble is brewing in town. Ronald Jefferson was acquitted of rape, but vigilantes have now killed the young black college student and firebombed his defense attorney’s house. Rumors soon implicate certain members of the elite Blackthorn Club, the gathering place of Newcastle’s movers and shakers. Odermatt’s shrewd plot puts Tucker right in the middle of this mess. As the facts of the vigilantes’ actions begin to leak, will Tucker do the right thing and go to the police, or will he desperately try to save his reputation (and his marriage)? Odermatt performs a masterly job of detailing this man’s moral struggle. Another coup is to set so much of the action in the newsroom of the Chronicle. Other crime writers have used dogged newspaper reporters as protagonists, but Odermatt—who spent his career as a journalist—goes a step further, showing readers the gritty job of getting out a metropolitan daily (“There was something about the urgency and organized chaos of the newsroom in the last hours before deadline that made reporters and copy editors think that getting out the paper was the most exciting thing, perhaps the most important thing, that happened in the city each day”). It’s a nice touch and a device that he may want to use in future novels. The writing is, as one might expect, more than competent, and the characters remain well drawn for the most part.

While the author does not yet have the chops of a Michael Connelly or James Lee Burke, this tale nevertheless delivers a clever plot centered on a besieged journalist facing ominous forces. 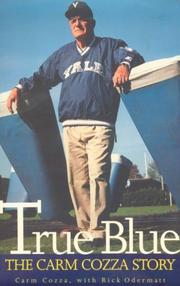 A beloved career college football coach reflects back on his coaching years in this endearing and modest autobiography. For 32 years, Cozza served as Yale’s football coach: From 1965 to 1996, his overall record was a .599 (179 wins, 119 losses, and 5 ties), with four championships and five co-championships. But although key games and rivalries are retold in detailed fashion, what comes out most in True Blue, co-written with Odermatt, a former newspaper reporter, columnist, and editor, is Coach Cozza’s appreciation for and commitment to his players. Cozza writes lovingly of his former players, including 14 who ended up in the NFL (such as Calvin Hill, Gary Fencik, John Spagnola, Dick Jauron), others now famous in other endeavors (Stone Phillips, Jack Ford), but most of whom found fame only in their college football years. Stories of young men who played hurt, such as Kelly Ryan and Jon Reese, are retold in a folkloric, inspiring way. Cozza, who turned down the position of athletic director in 1976 to remain the football coach, also shares his opinions on many issues such as the antiwar demonstrations of the 1960s and the restriction of competition. Most significantly, Cozza writes about the decline of Yale football, citing many factors including: the change from NCAA Division I-A to Division I-AA; the halving of male enrollment at the school due to coeducation; the escalating cost of education at Yale, which offers no athletic or full-ride merit scholarships; recruiting excesses and abuses that were a result of the proliferation of TV money; the dropping of Ivy League games from network telecasts; and an unresponsive admissions office. A book that will make all Yalies and Ivy League football lovers a little nostalgic. Coach Cozza’s story and his modest and paternal way of developing student-athletes can also serve as a blueprint for all college coaches.