Rita Welty Bourke has published over forty works of fiction and nonfiction in literary magazines including the NORTH AMERICAN REVIEW, CIMARRON REVIEW, LOUISIANA LITERATURE, SHENANDOAH, WITNESS, and the BLACK WARRIOR REVIEW. She lives in Nashville with her songwriter husband, Rory Michael Bourke. KYLIE'S ARK: THE MAKING OF A VETERINARIAN is her debut novel.

Ms. Bourke has completed a work of narrative nonfiction called THE WILD HORSES OF CUMBERLAND. The book interweaves the story of the family's annual visits with the sometimes violent and always fascinating history of the island.

“Bourke moves Kylie through her interesting careers with skill, maintaining reader interest and allowing her character to grow and develop through her widely varied experiences with animals. As a vet, Kylie articulates the particular pain of a caring medical professional treating creatures who are under the control of owners who may not value their lives or feelings very highly.”
– Kirkus Reviews 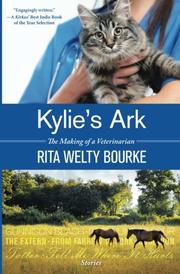 In Bourke’s debut novel, a young veterinarian is inspired and sometimes tortured by her intense empathy with the animals she treats.

Kylie Wheeler’s route to a career in veterinary medicine begins with an after-college job with the National Park Service observing and protecting endangered species of shorebirds on the New Jersey coast. From there, she travels to the Bitterroot Mountains of Montana to work on a National Forest Service project to investigate the feasibility of reintroducing the Canadian lynx to the environment. In both of these jobs, Kylie faces frustrations and rewards as she learns about the unique qualities of the birds and rabbits she studies as well as the human ignorance and indifference that so often contribute to animal suffering. Discouraged by the futility of keeping picnickers from trampling rare plover eggs and alienated by scientific research that requires the deaths of its subjects, Kylie goes back to school to become a vet. She finds that even the healing of sick and injured animals is complicated by money, professional egos, and human error. Bourke does an excellent job of animating Kylie—a cynical but warm and hardworking young woman who is quick to admit and relinquish her prejudices and cares deeply about the animals in her care even when she is supposed to affect professional detachment. The novel is engagingly written and never drags or dithers. The quick changes of scene can sometimes feel a bit disjointed, but Bourke moves Kylie through her interesting careers with skill, maintaining reader interest and allowing her character to grow and develop through her widely varied experiences with animals. As a vet, Kylie articulates the particular pain of a caring medical professional treating creatures who are under the control of owners who may not value their lives or feelings very highly.

An affecting portrayal of the making of a veterinarian and the day-to-day challenges she faces.

The Grapes of Wrath

"There isn't a train I wouldn't take, no matter where it's going." (Edna St. Vincent Millay)

KYLIE'S ARK: THE MAKING OF A VETERINARIAN: Kirkus Star

KYLIE'S ARK: THE MAKING OF A VETERINARIAN: Named to <i>Kirkus Reviews'</i> Best Books, 2017

The Wild Horses of Cumberland

The jutting chimneys and broken walls of Dungeness mansion, built in the 1880s by Lucy and Thomas Carnegie on Cumberland Island, stand in mute testimony to the Gilded Age. Stone by stone, it all came tumbling down. The great Carnegie fortune, assailed by taxes, political and social changes, and extravagant spending, was gone. Wild horses graze what was once the manicured grounds surrounding the ruins of the Carnegie mansion. My husband, Charlie, history enthusiast with a special interest in the Gilded Age, was suddenly interested. He wanted to know more about the people who lived here, as did I. Why did they want to own an entire island, and what became of them when it all disintegrated? Raimie, our daughter, was focused on the horses. An equestrian since age six, she wanted to know how what their lives were like, how they survived on this semi-tropical island. Months before, she’d seen the Bureau of Land Management horse corrals in Oregon where wild horses are kept until they are sent to slaughter houses, or until they die. The horses on Cumberland were free to roam without fear of helicopters and roundups. For the next ten years, the three of us, and sometimes other members of our family, returned to Cumberland Island. We walked the deserted beaches, swam in the ocean, brought apples for the horses. We picnicked on the beach where servants once served champagne, shrimp cocktails, and crab cakes to Carnegie family members and their guests. I’ve felt the pull of an ocean undertow in a place where Carnegie children swam in what were believed to be shark-infested waters. We gazed at the chimneys surrounding Stafford house, all that remain of slave quarters that once housed plantation field hands. We’ve seen the porch where Louis McKee lay dead, shot through the heart by his former lover. We stood by the burial mounds of yellow fever victims. Always, everywhere on the island, in the campgrounds, on the beach, at the Dungeness dock, the wild horses grazed nearby. Peacefully. Without fear. The ever-present thread through the lives of the people who lived on Cumberland—Civil War hero General William Davis, plantation owner Robert Stafford, Lucy Carnegie and her descendants, Louis Mckee and Carol Ruckdeschel—is the story of the horses. Union occupiers captured them and took them into battle. Stafford sold them to mainlanders, as did Lucy Ferguson. Droughts reduced their numbers; hurricanes washed them into the sea. They suffer parasite infestation, eastern equine encephalitis, and West Nile virus. Yet they survive. Cumberland Island is littered with things man left behind. Abandoned buildings are being scoured by sea salt, eaten by termites, destroyed by storms. Automobiles from the ’20s through the ’50s are sinking into the ground. Nature is devouring it all. But the horses that have lived on the island for 500 years remain. It may not always be so. Developers would like to build hotels, resorts, and gated communities on the island. To provide easy access, they need a bridge from the mainland. Long-time residents want to keep their vacation homes. They want the right to drive on the beaches and build new structures on their properties. Carol Ruckdeschel, island biologist, wants the road that runs along the spine of the island closed, the Lands and Legacies tours stopped, the chapel where JFK, Jr. married Carolyn Bessette moved to the southern part of the island. Ecologists argue that the horses are destroying the marshes, destabilizing the dunes, and threatening the biodiversity of natural wildlife. They want them removed. We want them to stay. The debate goes on. For now, the horses remain. Raimie says they are why we come to Cumberland, but there’s a deeper reason. We come to see nature notching up victory after victory: cars rusting away; jungle growth smothering buildings until the weight of the vegetation takes them down; tombstones that will dissolve as surely as the abandoned cars. Termites will continue to build tunnels from the ground up across the tabby foundations until they reach the wood. Hurricanes will tear off roofs; salt spray will gnaw at everything in its path. Mares will drop their foals, and most will survive. When we board the ferry that will take us back to the mainland, and night falls over the island, we are heartened by the knowledge that some combination of wind and rain will erase all evidence of our having been there.