R.M. Scott is a poet and fiction writer living in the mountains of Idaho. Her debut novel, UNSEEN, released July of 2021 (Literary Wanderlust). She holds a BA and MA in Business. Her passion lies in writing about the power of existence.

“An insightful tale of persecution and survival.”
– Kirkus Reviews 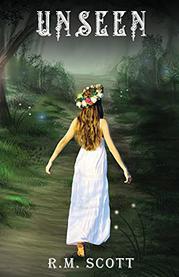 In Scott’s debut YA novel, a young girl tries to heal her father and avoid being harmed by supernatural forces persecuting members of her culture.

Alaia’s father is deathly ill, and she’s doing everything she can to save him with a doctor’s medicine and her own herbal remedies. If he dies, not only will she lose her dad, whom she loves, but it will also leave their family vulnerable to accusations of witchcraft if there’s no man in the house. She’s already under suspicion for her use of herbal remedies, and her position is made more precarious by her love for Mateo, the inquisitor’s nephew, and her former friendship with a woman who was executed for possessing a mark associated with witchcraft. When Alaia is visited by a spirit, who later saves her from being hit by a carriage, the mark that condemned her friend appears on her, too—bringing new magical abilities with it. Despite her efforts to hide the mark, she’s found out; the inquisitor tries to have her executed, and when Mateo seemingly damns her too, she escapes. She’s aided by the spirit of Txomin, a boy she once knew and who reveals information to her about her long-lost brother. Over the course of this supernatural adventure story, Scott weaves in clear parallels between Alaia’s story and those of real-life women who were accused of being witches in Europe and America. She’s particularly deft at showing the ways in which people in power can threaten and exploit vulnerable societies by appealing to their bigotry. By filtering the story through the lens of an oppressed culture, Scott highlights that the novel is about the persecution of a vulnerable group rather than a struggle between similarly powerful forces. The author also makes strong use of figurative language to convey her central characters’ feelings, which becomes just as important to the book’s goal of inviting empathy as its plot points are; at one point, for instance, Alaia’s fear is described in the phrase: “A throbbing pain split across my chest, unfurling like tentacles.”

An insightful tale of persecution and survival.