Founder and Chairman Emeritus of "Help For Children/Hedge Funds Care" - www.HFC.org - Twenty plus years of saving children from the trauma of Abuse - Chapters in twelve cities in seven countries - more than $55 million donated through more than 1,000 grants since inception;

Author of "What Goes Around Comes Around - A Guide To How Life REALLY Works" - www.whatgoesllc.com - Truly "A Book For Our Time!"

Over the course of adult life I have spent many years in the study of philosophy, psychology, and religion in the pursuit of understanding my own, and other people's motivations and behavior. I have particularly wondered how people I've come across or observed, could exhibit certain behaviors and think that they would be exempt from what would seem to be obvious repercussions, only to be amazed at the apparent disconnect between the timing of the actions and those repercussions, This in cases that affected me personally, and which I observed unfold in the lives of others. It has been a fascination that has led to the writing, over a period of 30 plus years, and the publication in December 2018, of "What Goes..." It took so long, because there were certain questions that I just could not answer. Neither seemingly could anyone else. However, that is no longer the case. Within this book is the explanation, told with the assistance of vignettes about people I've known over the years, who serve as perfect illustrations. I believe you will find it illuminating and worthwhile, and hope you'll let me know. 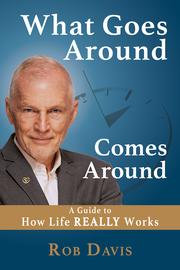 WHAT GOES AROUND COMES AROUND

In this debut self-help book, the author employs narratives about friends, family, and former associates to show the way thoughts and perspectives shape readers’ experiences.

Through short narratives describing the paths of different people he met along the way, Davis illustrates his imperatives for meditative, conscious, and positive living. Through stories about friends who learned from their mistakes and others who could not escape their own prisons of thinking, the author gives readers not just points or principles to ponder, but real human experiences that demonstrate them. For example, in one passage, Davis tells the tale of his teenage daughter, who, when allowed to make her own choices, realized she was in over her head and risked a loss of control. The story demonstrates both the potency of autonomy as well as the importance of finding the courage to ask for help, change one’s mind, and self-regulate. In another anecdote, the author deftly describes a woman he admired for being so energetic, upbeat, and seemingly content. Yet, to his shock, when his friend attempted suicide, Davis learned that outward cheer is not as simple as it might seem. The tales, while not all culminating in happy endings, effectively prove one point: Humans are the authors of their own stories, and only through self-reflection and accountability do individuals gain strength from experience. Through witnessing and sharing the personal plights of his friends, family, co-workers, and bosses, Davis skillfully provides surrogates for some of life’s hardest lessons, from humility to heartache to joy. The book ends with a compelling section of optimistic statements that can embolden readers if utilized as reflections or affirmations. A stable, positive, nonpreachy, objective voice makes the manual stand apart from others in the genre.

A successful guide that uses anecdotes to reveal powerful truths about life.