Robert Blumenfeld is the author of Accents: A Manual for Actors (1998; Revised and Expanded Edition, 2002); Acting with the Voice: The Art of Recording Books (2004); Tools and Techniques for Character Interpretation: A Handbook of Psychology for Actors, Writers, and Directors (2006); Using the Stanislavsky System: A Practical Guide to Character Creation and Period Styles (2008); Blumenfeld’s Dictionary of Acting and Show Business (2009); Blumenfeld’s Dictionary of Musical Theater: Opera, Operetta, Musical Comedy (2010); Stagecraft: Stanislavsky and External Acting Technique—A Companion to Using the Stanislavsky System (2011); Teach Yourself Accents: The British Isles (2013); Teach Yourself Accents: North America (2013); Teach Yourself Accents: Europe (2014); and the collaborator with noted teacher, acting coach, and actress Alice Spivak on the writing of her book How to Rehearse When There Is No Rehearsal: Acting and the Media (2007)—all published by Limelight. He lives and works as an actor, dialect coach, and writer in New York City, and is a longtime member of Equity, and SAG-AFTRA. He has worked in numerous regional and New York theaters, as well as in television and independent films. For ACT Seattle he played the title role in Ronald Harwood’s The Dresser, and he has performed many roles in plays by Shakespeare and Chekhov, as well as doing an Off-Broadway season of six Gilbert and Sullivan comic operas for Dorothy Raedler’s American Savoyards (under the name Robert Fields), for which he played the Lord Chancellor in Iolanthe and other patter-song roles. In 1994, he performed in Michael John LaChiusa’s musical The Petrified Prince, directed by Harold Prince at the New York Shakespeare Festival’s Public Theater. He created the roles of the Marquis of Queensberry and two prosecuting attorneys in Moisés Kaufman’s Off-Broadway hit play Gross Indecency: The Three Trials of Oscar Wilde, and was also the production’s dialect coach, a job that he did as well for the Broadway musicals, Saturday Night Fever and The Scarlet Pimpernel (third version and national tour), and for the New York workshop of David Henry Hwang’s rewritten version of Rodgers and Hammerstein’s Flower Drum Song. At the Manhattan School of Music, he was dialect coach for Dona D. Vaughn’s production of Strauss’s Die Fledermaus (2009); and for Jay Lesenger’s production of Weill’s Street Scene (2008), which he also coached for Mr. Lesenger at the Chautauqua Opera. Mr. Blumenfeld currently records books for Audible, among them Pale Fire (joint recording with Mark Vietor) and Bend Sinister by Vladimir Nabokov, for both of which he was chosen by the Nabokov estate; A Modest Proposal by Jonathan Swift; and Jurgen by James Branch Cabell. He has recorded more than 320 Talking Books for the American Foundation for the Blind, including the complete Sherlock Holmes canon, Victor Hugo’s The Hunchback of Notre-Dame, Alexandre Dumas’s The Count of Monte Cristo, a bilingual edition of Rainer Maria Rilke’s previously unpublished poetry, and a bilingual edition of Samuel Beckett’s Waiting for Godot, in Beckett’s original French and the playwright’s own English translation. He received the 1997 Canadian National Institute for the Blind’s Torgi Award for the Talking Book of the Year in the fiction category, for his recording of Pat Conroy’s Beach Music; and the 1999 Alexander Scourby Talking Book Narrator of the Year Award in the fiction category. He holds a BA in French from Rutgers University and an MA from Columbia University in French language and literature. Mr. Blumenfeld speaks French, German, and Italian fluently, and has smatterings of Russian, Spanish, and Yiddish.

“A superb primer on the machinery behind the laughs.”
– Kirkus Reviews 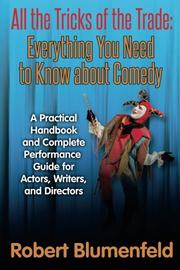 All the Tricks of the Trade: Everything You Need to Know about Comedy

Joke telling, pratfalls, the seriousness of silly characters, and many other things are explained in this revelatory guide to the art of comic acting.

Blumenfeld, an actor, director, and instructor (Accents: A Manual for Actors, 2004), covers an extraordinary range of topics in stage and screen comedy (but not stand-up) with both precise detail and intellectual depth. He starts with a classic comic procedural, explaining everything from how to nail a punch line—“When the laughter has subsided, but while some people are still laughing, the right moment for delivering the next line has arrived”—to the proper recipe for a pie in the face. He then delves beneath technique to explore a forthrightly Stanislavsky-an approach to building a believable comic character by elaborating psychology and motivation from the inside out. (It seems one can even do Gilbert and Sullivan by the Method.) The book’s core is a survey of theatrical comedy of different eras, visiting noted writers from Aristophanes to Woody Allen. These chapters contain notes on period dress, manners, and social relations—complete with pointers on correct bowing and curtseying—along with discussions of the major plays, genres, authors, actors, and evolving stage styles. They are studded with intricate set-piece studies of specific scenes in which dialogue is exhaustively analyzed as it relates to the characters’ motivation and the unfolding plot; actors will find in these sections a useful step-by-step template for preparing their own scenes. The book closes with encyclopedic biographical appendices of great comic playwrights and a glossary of terms. Blumenfeld’s fluent, engaging prose is sprinkled with interesting anecdotes—some taken from his own stage experiences—and nicely balances technical but never dull specifics of performance with the cultural background of comic theater. Showbiz professionals will find this an invaluable guide to their craft, but other readers can appreciate it for its fascinating explanations of how their favorite entertainments work.

A superb primer on the machinery behind the laughs. 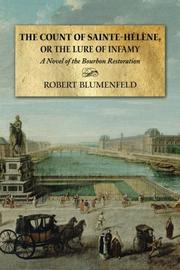 The Count of Sainte-Hélène, or The Lure of Infamy

In Blumenfeld’s (Teach Yourself Accents: Europe, 2014, etc.) historical novel, duplicity reigns in Bourbon Restoration–era France.
As the novel opens, the “charming, if slightly obsequious” Count of Sainte-Hélène, along with King Louis XVIII and other French elites, is watching a play about the abdication of Mary, Queen of Scots. The upheaval depicted onstage reflects the novel’s 1816 setting, in which the Bourbons have been newly restored to the throne, one year after Napoleon’s defeat at Waterloo and 27 years after the start of the French Revolution. The era’s social confusion has allowed the class structure to become more fluid than usual: Vidocq, the police detective, has his own history of criminality and prison escapes, and the aristocrats who frequent the king’s court don’t always have the highborn lineages they proclaim. When robbers strike the homes of some of those aristocrats, as well as the government’s Central Records Office, Vidocq is tasked with uncovering the mastermind, who appears to have an insider’s knowledge of the burgled homes. The disguise-loving Vidocq well knows, however, that appearances can be deceiving. The first scene’s setting is apt, as Blumenfeld’s novel is highly theatrical, adding fine flourishes to both its historical figures and its fictional characters. The king’s obsessive gluttony, a duchess’s strangely insightful malapropisms and a baron’s clueless seduction tactics (“Kiss me, my stuffed cabbage!”) would make any comedic actor exuberant. The novel’s third act centers on a series of trials, and the overall tension starts to dissipate as those trials progress; nonetheless, they would still make for vivid scenes on a lavishly designed stage. The author can sometimes be a bit showily clever and overly explanatory, as when he describes a man “whose moustache and beard hid not only his extreme probity, for he was the soul of honesty, but also his ruthless cunning, for he was the epitome of rapacity.” But his style is also precise, classic and witty, and an admirably faithful homage to 19th century French greats.

A lively ode to the classics, and to the twin delights of mischief and mayhem.