Robert J. Illo was born in the Bronx in 1958 and spent most of his formative years living on the New York and New Jersey coasts, within walking distance of Atlantic waters. He holds degrees from Penn State University, Capitol College and Drexel University. A licensed architect, he has a design practice in central Pennsylvania from which he takes time, as a licensed structural engineer, to inspect homes and businesses damaged by storms including Katrina, Sandy and many other storms which – like the people whose lives they alter – are not known to us by name. 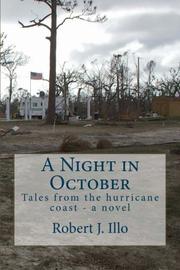 A NIGHT IN OCTOBER

In this debut novel, the devastation in New York and New Jersey resulting from Superstorm Sandy forever alters one family.

By the time Sandy rolled up the New Jersey and Long Island coastlines on Oct. 29, 2012, she wasn’t even a hurricane anymore. Yet the convergence of the Atlantic storm surge, high tides, overflowing rivers and bays from relentless rain, and the still-substantial winds swamped the homes and villages of thousands of Atlantic seaside dwellers. Ricky and Sherry Buono, in their late 60s, are having breakfast in their condo on one of New York’s barrier islands when Sandy begins her assault. In their second bedroom is Terry, the baby granddaughter they recently adopted from their younger daughter, Jessie, who took off for the Rocky Mountains. They have been through major storms before. When Sherry urges Ricky not to go into his Manhattan office for the day, he cheerfully reminds her he must work. Down on the Jersey shore, the Buonos’ older daughter, Cammie, and their son-in-law, Artie Reily, aren’t overly concerned. They too have weathered storms and electrical outages. They and their teenage son, Lee, go to sleep in their darkened home Monday night, having no idea that the floodwaters have begun filling the first level of their house. Illo, an architect and structural engineer, employs his keen eye for detail to provide vibrant explanations of storm dynamics and to develop rich character portrayals in a novel filled with the everyday moments and drama of ordinary human existence. As Sandy rages, the author takes his time to skillfully create small novellas within the larger work. Even the storm becomes a strong main character through Illo’s evocative prose: Sandy “only did what it was meant to do and it took up only the energy that our planet freely gave to it. This system carried no intention about where or how its energy would be unleashed.” He lingers a bit too long on technical matters of physics, but patient readers will be rewarded with important lessons.

Buck and Hemingway offer a good range but my favorite author depends on the need of the moment.

The Good Earth and For Whom the Bell Tolls offer a good range -- all the way from depression to despondency -- in which tiny gap can be found hope.

"Wheresoever she was, there was Eden" Adam's eulogy from Mark Twain's Diary of Adam and Eve, and "Solo i vivi possono accenderlo e spegnerlo." from Elsa Morante's Il Ladro Dei Lumi. Both contrast the balm of connection with the pain of separation.

To give more than one can expect in return.