Three years into studying architecture at the University of Illinois, in 1966 my draft status was changed from a student deferment to 1-A, and I joined the army to learn to fly helicopters. I spent a year in flight school and served as a combat helicopter pilot with the 1st Cavalry Division in the Vietnam War. In the spring of 1968, I was severely injured and spent 10 months in the hospital, after which I was assigned as a flight instructor at the Army’s training base at Fort Rucker, Alabama. Discharged in 1970, I spent the subsequent 12-years on an odyssey of healing and transformation of the warrior spirit—the story told in my two-volume memoir, of which Journey to Myrtos is the first book. I re-integrated into American society in 1982 and spent the subsequent 26-years teaching mathematics, English and history at the secondary level.
I hold a BSc in mathematics with minors in history and art, post-graduate work in education and doctoral work in the History of Consciousness. My first book, Nurturing the Souls of Our Children: Education and the Culture of Democracy, is a reworking of my doctoral thesis. That book is currently being prepared for re-publication as two volumes. I retired from teaching in 2006 and have spent the past nine years lecturing on education. Additionally, I have a lecture based on this memoir. “The Warrior Spirit and the Trauma of Mechanized Warfare” was first presented in 2013 and has subsequently been presented at the C.G. Jung Institute in Zurich Switzerland, as well as to several Jungian and veterans groups around the United States. Offers to present the lecture are welcome.

“...the author offers a highly intellectual Vietnam War memoir that's more poetic than most pain-wracked soldier stories. His ruminations on mythologies, metaphysics, and human sexuality--both classic and modern--have one foot on the battlefield and the other in New Age philosophy...”
– Kirkus Reviews 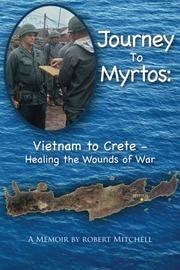 In this memoir, Mitchell (Nurturing the Souls of Our Children, 2005) describes his Vietnam service and his political, sexual, and philosophical awakening during a subsequent European journey of self-discovery.

Mitchell, the product of a nomadic childhood, attributes his early, magical outlook on life to his “Druid” ancestors; it led him to dance naked on moonlit nights beneath the gaze of the “Goddess of the Moon.” In the 1960s, he was fired up by thoughts of battle—inspired less by Cold War–era, anti-Communist fervor than by a primordial, warrior-spirit calling, à la Achilles at Troy. He put up with dehumanizing boot-camp drills so that he could have the chance to fly helicopter scout missions. But he was struck by the Vietnamese countryside and culture, feeling that the enemy Viet Cong had a personal intimacy with nature that the mechanized, “soulless” American side lacked. (In this, he claims to have foreseen America’s defeat.) When an air crash left Mitchell badly burned, he accepted an honorable discharge without ever having the “catharsis” of taking a foe’s life. Restless, he studied the classics and traveled through Europe, where a life-changing love affair with a dashing, confident German actor finally allowed him to embrace same-sex eros (love) over the siren-song of thanatos (death). In Greece, he had a dream-vision of the goddess again, hinting at a journey of rebirth: As he puts it, “the transformation of the warrior into serving the Eros spirit is the objective of the heroic struggle in the soul between love and death.” As this passage shows, the author offers a highly intellectual Vietnam War memoir that’s more poetic than most pain-wracked soldier stories. His ruminations on mythologies, metaphysics, and human sexuality—both classical and modern—have one foot on the battlefield and the other in New Age philosophy and a gay coming-of-age story. Although this book clearly and eloquently springs from the heart, armchair commandos will find their helmets spinning at the diversity of its target acquisitions.

A genre-blending mission report from an atypical disillusioned Vietnam vet.

"Too much sanity may be madness and the maddest of all is to see life as it is and not as it should be." Miguel de Cervantes

creating and playing a character in an adventurous drama

the Greek and the American Indian cultures are used to illustrate the concept of culture and democracy coming together, and these examples are compared to Walt Whitman's vision of a "Spiritual" Democracy in America. America's cautious steps toward, and regress from, a spiritual democracy are outlined as three successive philosophical governing principles that have guided education in America for over 200 years: 19th century acculturation to a Eurocentric American national/cultural identity; 20th century socialization and, currently, a utilitarian model for the standardization of the child's mind and personality. The dangers to this approach are discussed in terms of damaged soul nurturing relationships in the home and in the classroom; the failure to teach a cultural curriculum; and the negative consequences for our democracy. I argue that a cultural curriculum is needed to balance the influence of the STEM curriculum. The Appendix to book two of this series is a complete outline for a K-12 cultural education curriculum that incorporates science, technology, engineering and math and gives them a cultural context. This is an important seminal work for a revived and much-needed national discussion on education.

Seeking the Archetype of the Teacher

This first book of a two-book series on education uses a blended genre of storytelling and essay to take the reader along on one teacher's quest of the vocational archetype of the teacher. My first year of teaching was in a small private school where I taught math, English, history and art with no prior training or experience as a teacher. The subsequent acquisition of my teaching credential taught me the difference between the competent professional teacher and the vocational archetype. I outlined three vocational goals that would help me find the archetype in my own personality. The most significant goal, for me, was to discover a philosophy and psychology of education that I was comfortable with in front of the class, at the nexus between theory and practice. This unique and accessible approach will appeal to both parents and teachers. In the following chapter, I revert to the anecdotal style of chapter one in my descriptions of what Allan Bloom called "the art of teaching." The book concludes with two brief chapters outlining the archetypal relationship between children and the adults in their lives: parents and teachers. This two-book series is an important seminal work for a revived, much-needed public discussion on education.

The Trials of the Initiate: Transforming the Warrior Spirit

Swept into the nurturing arms of the goddess in Myrtos reawakened my sensitivity to the world, and my new pathway to initiation was opened. I fell in love with a strong, mentoring French woman, Coraline, and we were married. Our adventure took us to Tunisia, where our child was born; to Mexico, where I encountered the dark side of the Mother archetype; and to Morocco, where I witnessed the love that heals the fratricide of war, transforming the warrior spirit. The warrior spirit can now fulfill its oath, "to defend the nation against all enemies foreign and domestic." This new adventure carried me into the mystic realm. The enemies confronted there were the perpetrators of the "spiritual malaise" named by President Carter and prevalent throughout American society. Navigating the razor's edge between the objective world and the world of shadows, drove me to the brink of sanity, but I emerged from this initiation ordeal transformed and ready to reintegrate into American society. Twelve years after being discharged from the army I returned home to serve my community as a secondary school teacher. A return to Crete, two years later, concluded the trials with a ceremony in a mountain cave and a celebration with friends in a peasant taverna.
Published: March 7, 2012
ISBN: 978-1468025637